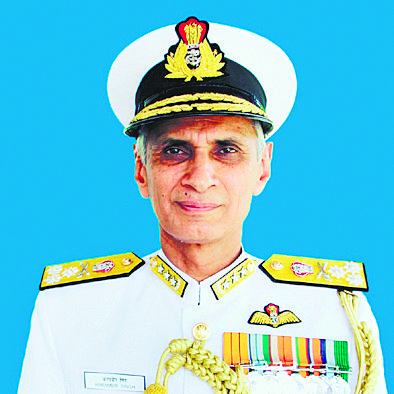 India is looking to pursue underwater unmanned technologies. The US has made rapid advances in this field and given some exposure to India of technologies and systems that the Indian Navy wishes to pursue, said the Indian Navy Chief Admiral Karambir Singh at a seminar.

He cited the discovery of ‘Chinese-origin’ autonomous underwater gliders in Indonesian waters as an indication to the extent to which technology has progressed.

The seminar ‘Trends and Technologies in Underwater Vehicles’ was organised by the Directorate of Naval Design (Submarine Design Group) in partnership with Society of Indian Defence Manufacturers (SIDM).

Be ready to deal with any situation

Air Chief Marshal RKS Bhadauria has asked top commanders of the Southern Air Command to remain ever ready for fulfilling its operational mandate. He made the remarks at a commanders’ conference of the SAC.

Admiral Singh listed ‘underwater domain awareness’ as one of the most critical areas for the Navy, adding that complexity of modern warfare meant that enablers such as ‘artificial Intelligence’ would be essential for efficient and effective use of underwater systems. At the same seminar, the Vice Chief of the Indian Navy, Vice Admiral G Ashok Kumar, said the Indian Navy, had understood the importance of unmanned solutions and recently envisioned a detailed roadmap for itself in this realm. The Navy intends to share with the industry what is needed, when and at what cost and in what numbers.

Underwater vehicles bring in results which are too prominent to be ignored, the Vice Admiral said.