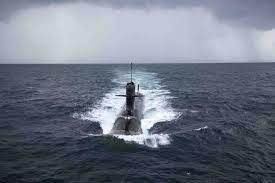 The Central Bureau of Investigation (CBI) said it had arrested five persons, including a serving naval Commander, on the allegations of leaking confidential information related to an ongoing submarine project in return for illegal gratification.

The Central Bureau of Investigation (CBI) today said it had arrested five persons, including a serving naval Commander, on the allegations of leaking confidential information related to an ongoing submarine project in return for illegal gratification. All five arrested have been sent to judicial custody.

CBI officials said the probe agency had initiated action in a secret operation last month in which two retired Navy officers and as many private persons in addition to the serving officer were taken into custody.

The agency has so far conducted searches at 19 locations in Delhi, Mumbai, Hyderabad and a few other places from where they have seized important documents and digital evidence. All the seized material is being examined, the officials said.

It is alleged that the Commander had discussed crucial details about the ongoing modernisation project of Kilo-class submarine with the two retired officers for illegal gratification, the officials said.

The Anti-Corruption Unit of the CBI, which handles sensitive and high-profile cases, was tasked to unearth the leakage of information following which the operation was undertaken.

The CBI search team has also questioned several other officers and ex-servicemen who were in regular touch with the arrested officer and retired personnel.

The agency is conducting a forensic analysis of digital devices used by the officer to find out if the information has fallen into the hands of people with vested interests.