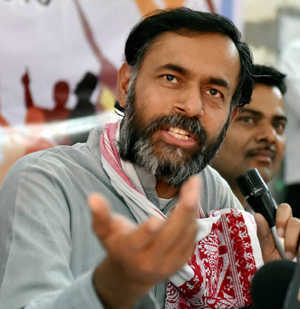 “The National Commission for Women has come across media reports of the sexual assault of a 26-year-old woman at Tikri border, Haryana. It is being alleged that Yogendra Yadav and other protesters of the Samyukta Kisan Morcha were aware of the sexual assault committed upon the girl but unfortunately, they did not inform the police about the incident.

The Samyukta Kisan Morcha (SKM) had on Sunday said that it had zero tolerance towards violence against women amidst reports that the woman activist from West Bengal was sexually assaulted on her way to join the farmers protest and later at Tikri border by some persons posing to be “Kisan Social Army” members.

It said it will probe the allegations that some of its leaders were aware of the reported sexual assault of a woman activist at the Tikri border protest site, who later died due to COVID-19 at a private hospital in Haryana.

Laying down the timeline of events, Yadav said the farmers outfit came to know about the alleged assault only after the victim’s father, who was also present in the press conference, came to meet them on May 2.

The farmer leader in a tweet replied to NCW Chairperson Rekha Sharma, who said in a post that she was sending a notice to the activist for not reporting the matter to the police.

“Eagerly waiting for your notice @sharmarekha ji. I thought @NCWIndia would honour me for going out of my way to rescue a woman. But I was wrong. Your agenda is different. I hope you are as prompt in using Twitter to do what your commission was meant to do,” Yadav said.

The Haryana Police had on Sunday formed a special investigation team to probe the case.

Several farmers are protesting against the farm laws at border points of Delhi, including Tikri and Singhu, since November last year. — PTI