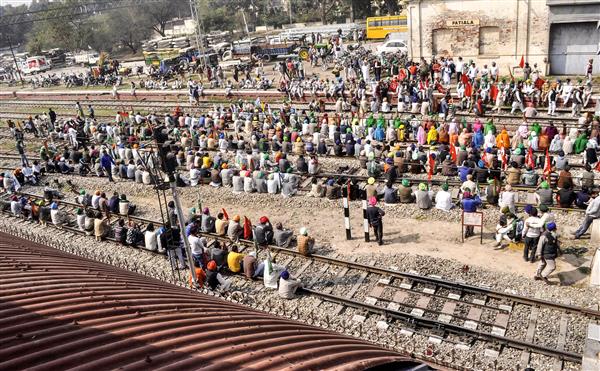 Members of various farmer organisations block a railway track during a four-hour rail roko demonstration across the country, called by Samyukta Kisan Morcha (SKM), as part of their agitation against Centres farm reform laws, in Patiala. — PTI

There was negligible or minimal impact on railway services due to the rail roko agitation called by farmer groups on Thursday, a spokesperson for the national transporter said.

He said the majority of the zonal railways reported no incident due to the protest.

“The rail roko agitation passed off without any untoward incident. There was negligible or minimal impact on running of the trains across the country. Train movement in all the zones is normal now,” the spokesperson said.

“Majority of the zones have reported not a single case of any stoppage of train by the agitators. Few trains were stopped in some areas of some Railway zones but now train operation is normal and trains are being operated smoothly. While dealing with the Rail roko agitation, utmost patience was exercised by all concerned,” he said.

Earlier, around 25 trains were regulated by the Railways on account of the agitation. — PTI