Neither 'claimant nor desirous' for PM's post, working for united Opposition: Nitish Kumar : The Tribune India

Neither 'claimant nor desirous' for PM's post, working for united Opposition: Nitish Kumar

After meeting CPI-M general secretary Sitaram Yechury, Kumar, who is on his first visit to the national capital after snapping ties with the BJP-led NDA last month, asserted that his focus is to bring together all opposition parties 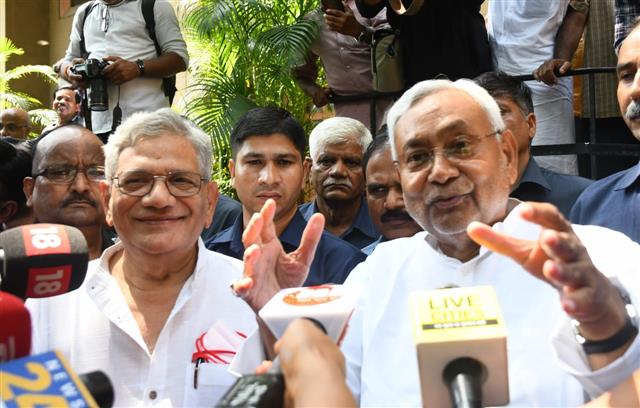 Bihar Chief Minister Nitish Kumar on Tuesday met several opposition leaders, including those from the Left and Delhi chief minister Arvind Kejriwal, and claimed that he is neither a claimant for the Prime Minister’s post nor desirous of it.

After meeting CPI-M general secretary Sitaram Yechury, Kumar, who is on his first visit to the national capital after snapping ties with the BJP-led NDA last month, asserted that his focus is to bring together all opposition parties.

It is time for the Left parties, the Congress and all regional parties to come together to form a united opposition, Kumar told reporters, amid speculation that his party is eying the leadership role for him in a proposed united front against the BJP in the run up to the 2024 Lok Sabha polls.

“I have had a long association with the CPI-M from my younger days. You all have not seen me, but whenever I used to come to Delhi, I used to come to this office. Today we are all together again. Our entire focus is to unite all Left parties, the regional parties, Congress. This will be a big deal if all of us come together,” he said.

Asked about his aspirations to become prime minister, Kumar said, “This is wrong. I am not a claimant for the post, nor am I desirous of it.” According to Yechury, Kumar’s return to the Opposition fold and his desire to be part of a fight against the BJP is a great signal for Indian politics.

Delhi Deputy Chief Minister Manish Sisodia was also present in Kumar’s meeting with AAP leader Kejriwal, whose equations with several other opposition parties like the Congress are far from smooth. JD(U) leader Sanjay Jha accompanied Kumar in his meetings.

“Many thanks to Nitish ji for visiting my residence. Discussion was held on many serious issues related to the country like education, health, ‘operation lotus’, open horse-trading of MLAs to topple popularly elected governments, and increasing unrestrained corruption, unemployment and corruption for BJP dispensations,” Kejriwal tweeted while attacking the saffron party.

The meeting between the two leaders lasted for nearly 90 minutes.

The Bihar chief minister had met Congress leader Rahul Gandhi at his residence on Monday.

Kumar has maintained that any opposition alliance against the BJP must include the Congress and the Left, a contention that is not fully shared by the AAP, Mamata Banerjee’s TMC and K Chandrashekar Rao’s TRS.

JD(U) spokesperson K C Tyagi asserted the Congress and the Left parties are an “essential component” of any non-BJP formation as he noted that his party has authorised Kumar to take required steps to bring together all opposition parties.

The state’s longest serving chief minister also expressed his thanks to the Congress and Left leaders for their support to him after he snapped ties with the BJP.

Though he has constantly tried to play down the buzz about his prime ministerial bid, there has been a clamour within his party that Kumar is the most appropriate candidate to take on the mantle of the opposition leadership due to his vast experience and clean image.