Video showing Nepali youth being forcibly tonsured, ‘Ram’ being etched on his head is doing the rounds on social media. 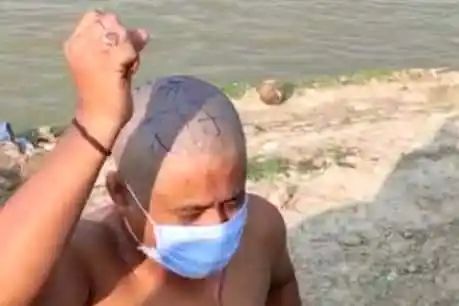 Video showing Nepali youth being forcibly tonsured, ‘Ram’ being etched on his head is doing the rounds on social media.

India and Nepal may have waded into another controversy after a video purportedly showing a Nepali youth being forcibly tonsured and ‘Ram’ being etched on his head in Uttar Pradesh began doing the rounds on social media.

Nepali Ambassador Nilambar Acharya called UP Chief Minister Yogi Adityanath to draw his attention to the video and ascertain the facts. The video gives no indications about the place of occurrence except that the youth’s head is being shaved next to the banks of a river.

Nepali social media activists have been highlighting the video and pointing out that this was a fallout of Prime Minister KP Oli’s statement about Ram and Ayodhya. Oli had said that the ‘real’ Ayodhya was in Nepal and not in Uttar Pradesh, India.

They alleged the youth was surrounded by a few people who could not be seen in the video but could be heard raising slogans against Nepal and Oli. The man was also prodded to shout ‘Jai Shri Ram’ and ‘Bharat Mati ki jai’.

While the Nepal government is still engaged with the UP government to ascertain the facts, the issue has generated heat in Kathmandu where social media users have urged the government to take immediate action.

However, other voices urged Nepalis to stay calm and push for a peaceful solution.

One social media post said if the government was serious about this issue and does not move towards a speedy solution, it will create a frightening situation.

“If the people-to-people relationship deteriorates, many innocent people will lose their lives,’’ said Jerung Surya, a social media user.

According to The Indian Express, “Convener of the little-known Varanasi-based fringe group Vishwa Hindu Sena Arun Pathak recorded and shared the video of the incident on his Facebook profile.”

In a tweet, Varanasi police said they have registered a case and would investigate the matter further.