Woman, who was battling for her life after the assault, died at Delhi hospital on Tuesday 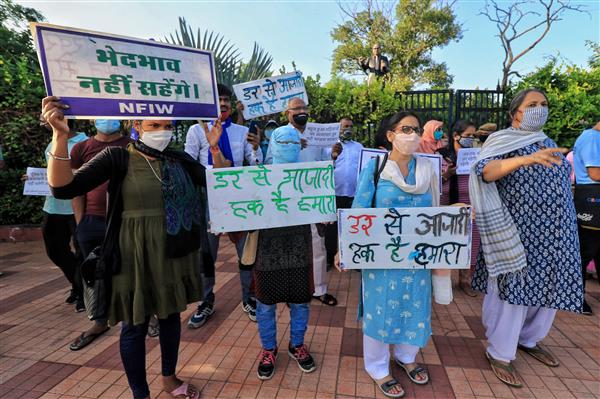 National Federation of Indian Women activists protest against the Uttar Pradesh government over the death of Hathras gang-rape victim, at Ambedkar Circle in Jaipur, on Wednesday, September 30, 2020. PTI

The NHRC has issued notice to the Uttar Pradesh government and the state’s police chief in connection with the gang rape of a 19-year-old Dalit woman in Hathras district, officials said on Wednesday.

The woman, who was battling for her life after the assault, died at Safdarjung Hospital on Tuesday.

The National Human Rights Commission (NHRC) has taken suo motu cognisance in connection with the “gang rape and brutality of a 19-year-old women belonging to the Scheduled Caste in Hathras district”, the rights panel said in a statement.

According to reports, she had gone missing on September 14 and was found in a badly injured condition on September 22, and was subjected to gang rape and brutality in Hathras over two weeks ago, it said.

The Commission has sent notices to the chief secretary of the state government and the Director General of Police of Uttar Pradesh, the officials said.

On September 14, the young woman had gone to the fields with her mother and went missing soon after. She was found later, beaten and tortured, her tongue cut as she bit it when the accused attempted to strangle her.

She was first admitted to Aligarh Muslim University’s Jawaharlal Nehru Medical College and Hospital and then shifted to Safdarjung Hospital in Delhi on Monday. — PTI