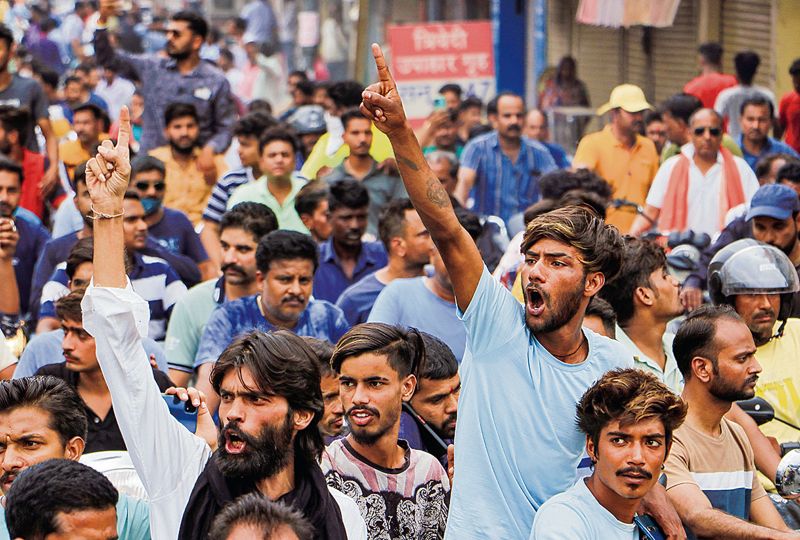 The National Investigation Agency (NIA) on Wednesday booked Ghous Mohammad and Riaz Ansari, prime accused in the brutal killing of Kanhaiya Lal Teli in Udaipur on Tuesday, under various sections of the IPC and the anti-terror Unlawful Activities (Prevention) Act.

The duo, the NIA said, intended to “strike terror among masses across the country”. Rajasthan DGP ML Lather corroborated the NIA’s terror angle theory by claiming that Ghous had links with Pakistan-based group Dawat-e-Islami and had visited Karachi in 2014. Three more persons had been detained, said the DGP, not ruling out a similar Pakistani link for Riaz. He said Dawat-e-Islami had offices in Mumbai and Delhi and all angles were being probed.

Ghouse and Riaz allegedly hacked Kanhaiya to death with a cleaver at his shop and posted videos online claiming they had avenged “insult to Islam”. An autopsy revealed 26 wounds on the victim’s body.

The Ministry of Home Affairs rushed an NIA team to Udaipur last night after a preliminary probe suggested the accused were influenced by terror group ISIS. Union Minister Anurag Thakur attacked the Congress-led Rajasthan government for “acute lapses”. “The Chief Minister cannot evade responsibility. The Congress’ internal rivalries are taking a toll on law and order. There are several examples, but this time all limits were crossed,” said Thakur. Rajasthan Chief Minister Ashok Gehlot appealed for peace and announced promotions for the police personnel who had arrested the accused within hours of the crime. He also convened an all-party meeting in Jaipur to seek “cooperation in maintaining communal harmony”. Congress’ publicity chief Pawan Khera defended Gehlot saying “he had ensured the accused were arrested promptly”.

Among the accused, Riaz was a welder and Ghouse was into petty jobs, the police said. “The weapon was made by Riaz,” the DGP said.

Kanhaiya’s family revealed a June 16 letter that the victim had written to the police, flagging threats to his life over a social media post he had subsequently withdrawn. Protection was not granted, though Kanhaiya was arrested for the post on allegations that it “disturbed communal harmony”. The initial complaint against him was filed by his Muslim neighbour.

“My husband was afraid of even opening his tailor shop. Some people were stalking him. The police didn’t help. We want the killers to be hanged,” the victim’s wife said.