NIA to probe killing of chemist in Amravati in Maharashtra: Home Ministry 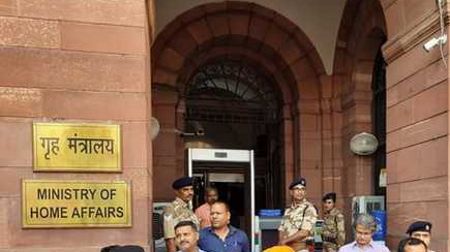 The Union Ministry of Home Affairs (MHA) has directed the anti-terror federal probe agency NIA to take over the probe into the brutal killing of Maharashtra’s Amravati-based chemist Umesh Kolhe on June 21 following his Facebook post in support of suspended BJP spokesperson Nupur Sharma.

The office of the Home Minister (HMO) in a twitter post announced the decision of the ministry directing the NIA to take up the probe in the case, as the matter prima facie appeared to be similar to the case in Udaipur where two assailants beheaded local tailor Kanhaiya Lal Teli.

“MHA has handed over the investigation of the case relating to the barbaric killing of Shri Umesh Kolhe in Amravati Maharashtra on 21st June to NIA,” HMO India said in tweet, while adding that the NIA has been directed to investigate “the conspiracy behind the killing, involvement of organisations and international linkages would be thoroughly investigated”.

Exactly a week before tailor Kanhaiya Lal Teli was hacked to death in Udaipur, Umesh Prahladrao Kolhe, a 54-year-old chemist, was killed in Maharashtra’s Amravati district on June 21.

Investigators so far believe that Kolhe was killed allegedly in retaliation for a social media post supporting BJP’s former spokesperson Nupur Sharma, who had made controversial remarks on the Prophet Mohammad during a television debate.

Their interrogation revealed the involvement of four more persons, of which three -- Abdul Thoufik, 24, Shoaib Khan, 22, and Atib Rashid, 22 -- were arrested on June 25, while one Irfan Khan, who runs an NGO is absconding. Khan is alleged to be the prime accused in the case.

In Udaipur, a tailor Kanhaiya Lal was hacked to death inside his shop by two men on June 28. The HMO had also handed over the Udaipur case to the NIA to investigate it.