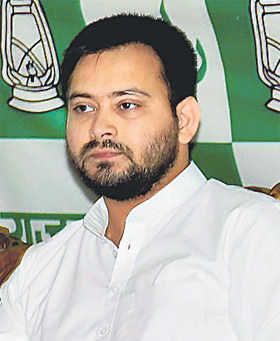 Bihar Chief Minister Nitish Kumar could emerge as a “strong candidate” for Prime Minister in 2024 if Opposition parties agreed to consider him for the job, RJD leader Tejashwi Yadav said on Sunday.

The national executive of the JD (United) would meet in Patna on September 3 and 4 and the prevailing political situation and organisational matters would be discussed, party’s general secretary Afaque Ahmed Khan said. TNS

Kumar, who recently swapped alliance partners by dumping the BJP and returning for a second time to the RJD-led Mahagathbandhan in Bihar, enjoyed “immense goodwill” on the ground, Yadav said.

The coming to power of the Mahagathbandhan, which now comprises the JD(U), RJD, Congress and several small parties in Bihar, “augurs well for opposition unity”, said Yadav, who made a comeback as Bihar Deputy Chief Minister. “It signals that most of the Opposition parties recognise the larger challenge before the country — the hegemony of the BJP, where on the back of money, media, and (administrative) machinery power, they are determined to stamp out all diversity from the Indian society as well as from the political spectrum,” the RJD leader said.

It is also a question of regional representation and social justice and development issues at the level of states, Yadav said.