Ahead of Prime Minister Narendra Modi’s rally in Patna on Wednesday, three-time Chief Minister Nitish Kumar appears to have gone missing from the BJP posters there.

Sources say the Chief Minister, who was recently seen losing his cool at rallies, appears to be on slippery ground in the state. Apart from Patna, the PM will also cover Darbhanga and Muzaffarpur. At Sakra in Muzaffarpur district today, a slipper was flung towards Nitish by some protesters while he was going towards his helicopter after completing his speech at an election meeting.

The police took four persons in custody on the charge of creating disturbance at the rally, police sources said.

The Sakra incident is one of the many protests Nitish has faced during his rallies in different parts of the state. At many places, Nitish lost his cool and chided protesters for “acting on behalf of political rivals” and telling them that nobody was bothered even if they didn’t vote for him. 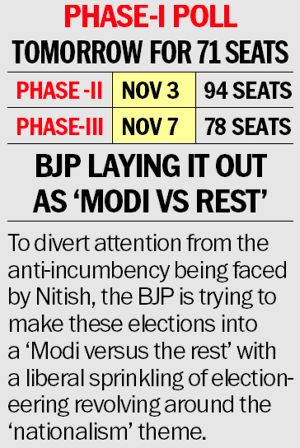 To divert attention from the anti-incumbency being faced by Nitish, the BJP is trying to make these elections into a ‘Modi versus the rest’ with liberal sprinkling of the BJP-style electioneering revolving around “nationalism”, “development” and “double engine growth under the NDA” vis-a-vis the “anti-national Opposition”.

“The fact that people are equally angry with the Opposition as they are with the ruling coalition, Modi’s popularity might save the day for Nitish on November 10 (day of counting),” say observers. (Inputs from PTI)