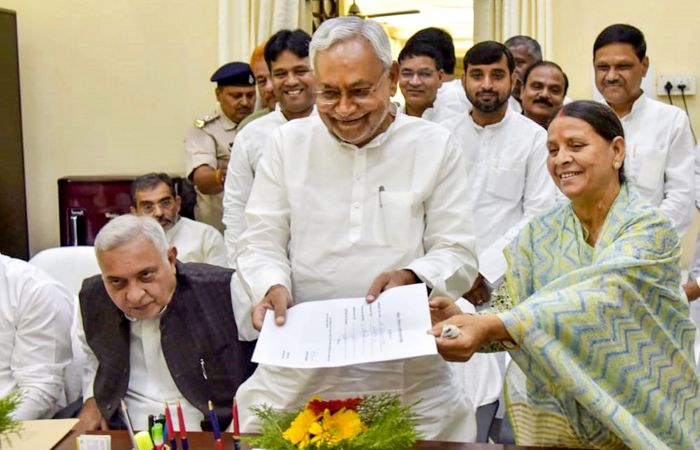 The day that began with the CBI conducting raids at RJD leaders’ premises in connection with the land-for-job scam saw heated exchanges in the Assembly over the issue, with Deputy CM Tejashwi Yadav slamming the BJP and calling the agencies its jamais (sons-in-law). The raids were carried out in Delhi, Patna, Katihar, Madhubani and also Haryana’s Gurugram.

Nitish also took on the BJP, dismissing all allegations levelled against him regarding his “flip-flops”, returning to the RJD fold and having ambitions to become the Prime Minister. He said his only ambition was to work for Bihar. Speaking during the debate on the motion of confidence, the JD(U) supremo said he did not want to become the CM when he rejoined the RJD and the grand alliance (which he had quit in 2017 to rejoin the NDA). Targeting the BJP’s current leadership, Nitish underscored the contrast with the era of Atal Bihari Vajpayee, LK Advani and Murli Manohar Joshi, saying that they treated him with respect. Nitish also said his requests for Bihar’s progress like having central status for Patna University were not accepted by the Centre. Without mentioning the PM, he said: “The current dispensation does little but wants publicity.”

The ED, CBI and the IT Department are the three jamais the BJP sends to states where it is not in power.

With the support of 165 MLAs, the grand alliance easily won the trust vote in the 243-member Assembly.

Ahead of the floor test, the CBI conducted simultaneous raids on the premises of RJD MPs Ashfaque Karim and Faiyaz Ahmad and MLC Sunil Singh. Searches were also carried out at the residence of former RJD MLC Subodh Rai and other leaders, according to reports.

Sources said the raids were being conducted in connection with the land-for-jobs scam in the Railways during the tenure of RJD chief Lalu Prasad as Union Minister. The CBI also raided a mall in Gurgaon which media reports suggested was owned by Tejashwi, who rubbished the claims. “These media outlets should do some research. The mall belongs to someone based in Haryana, and was inaugurated by a BJP MP.”

Tejashwi called the ED, the CBI and the IT Department are the “three jamais which the BJP sends to states where it is not in power”.

He also accused BJP of trying to split the JD(U) to “wipe out socialist ideology”. Praising Nitish for taking a “courageous decision”, he said the CM had brought a “new ray of hope” for the people of the country. “You are all scared of facing 2024 poll as a united Opposition will trounce the BJP. Hence the three ‘jamai’ are being sent,” he was quoted as saying.

BJP leaders protested each time he used the word.

As BJP lawmakers walked out, the CM accused them of “running away”.