No Covid compensation claim can be rejected on technical grounds, says SC 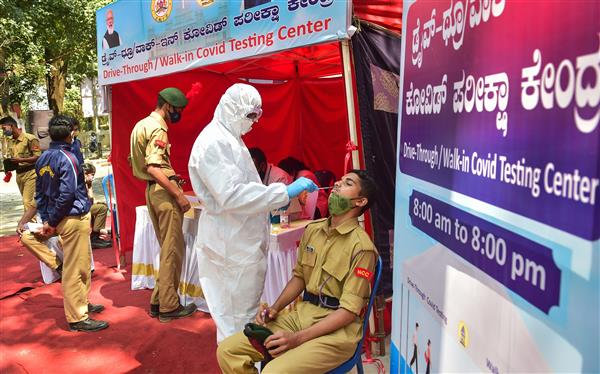 A health worker collects swab sample of an NCC cadet for Covid-19 test, during the launch of a Walk in/Drive in Covid-19 Testing Centre, in Bengaluru, on Wednesday, January 19, 2022. PTI

The Supreme Court on Wednesday said no claim for compensation filed by the family members of Covid-19 victims can be rejected on technical grounds.

“Claimants should be given a chance to rectify their applications and such claims should be examined by the grievance redressal committee within a week from today,” a Bench led by Justice MR Shah said.

The Bench also directed that children who lost their parents to Covid19 also be included in the compensation cover given by states.

“We direct states to reach out to those children who have lost both the parents or the surviving parent and whose particulars are already uploaded on the Bal Swaraj portal, so that the amount of compensation can be paid to them,” it said.

As reported on Bal Swaraj Portal, approximately 10,000 children have lost both the parents across India.

Noting that it will be very difficult for such children to file an application for compensation, it directed the states to share full information/particular in this regard.

Earlier in the day the Bench directed the chief secretaries of Andhra Pradesh and Bihar to appear before it as it pulled up the state governments for failing to disburse compensation to the next of kin of Covid-19 victims.

The chief secretaries of Andhra Pradesh and Bihar appeared before the Bench through video conference at 2 pm. The Andhra Pradesh Chief Secretary assured the Bench that in all cases where applicants had not received compensation will reviewed and he was ready to face contempt if it was not done.

The Bench said, “We trust and hope that the Chief Secretary will stand by what he has assured this court.”

On behalf of Andhra Pradesh Government, senior counsel R Basant said the state received 49,292 applications of which 31,000 were found to be eligible while 6,000 were rejected. He said 28,000 claimants had received payment.

On behalf of Bihar Chief Secretary, advocate Abhinav Mukherjee submitted that all attempts will be made to reach out to the poor and illiterate so that they can make their applications.

Doubting the Covid-19 death figures in Bihar, the Bench during the pre-lunch hearing said, “We are not going to believe that only 12,000 people died in Bihar due to Covid. We want your chief secretary to be here virtually at 2 pm.”