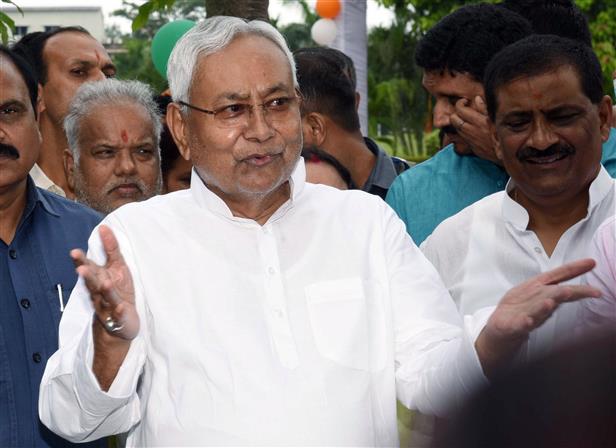 Bihar CM Nitish Kumar speaks to the media in Patna on Friday. ANI

Two days after installing the grand alliance government in Bihar, Chief Minister Nitish Kumar on Friday said he was looking forward to playing a “positive” role in forging Opposition unity ahead of the 2024 General Election while his deputy Tejashwi Yadav of the RJD called on Congress president Sonia Gandhi and Left leaders in the Capital.

‘RCP’s induction didn’t have my nod’

Claiming that “jungle raj” had returned to Bihar, BJP spokesperson Sambit Patra said that several people had been killed since the JD(U) and RJD came to power.

After his meetings with Sonia, CPM general secretary Sitaram Yechury and CPI chief D Raja here, Tejashwi said Bihar, the land which gave birth to democracy, had again shown the way to the country. He said Nitish Kumar’s return to the socialist fold was a “slap on the face of the BJP which attempts to intimidate those who can get intimidated and buy off those who can be bought.”

Speaking of his ailing father Lalu Prasad Yadav, admitted in Delhi, Tejashwi said, “My father was neither intimidated nor bought.”

In Patna, Nitish once again dismissed talks of nursing prime ministerial ambitions, telling reporters: “Please do not ask me such questions. I want to serve my state. I have no such (lofty) ambitions. I say so with folded hands.”

To a pointed query on whether he would cement the scattered Opposition to take on the BJP juggernaut, Nitish said: “Our role will be positive. I have been receiving many telephone calls. It is my wish that all come together (against the BJP-led NDA). You will see some action in the days to come.”

Nitish had on the day of oath-taking, in a salvo at the ruling BJP, asked: “Will those who won in 2014 win in 2024?” The CM also exuded hope that the “misuse of agencies such as the CBI and the ED against the Opposition” would not work in Bihar. “Those habituated to the misuse of agencies will face public ire,” Nitish said, backing Tejashwi’s promise of 10 lakh jobs to the youth in the first Cabinet meeting.

Tejashwi’s meeting with Sonia and Left leaders is significant in the light of the Cabinet formation early next week with the RJD eyeing a lion’s share in the state.