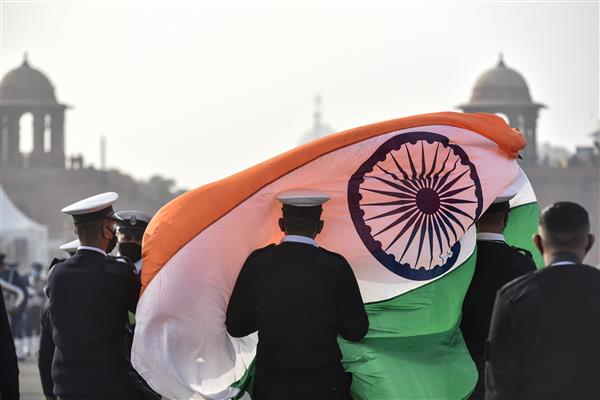 Navy personnel hold the Tricolour as they rehearse for the Beating Retreat ceremony at Vijay Chowk, in New Delhi, on Tuesday, Jan. 18, 2022. PTI

Soaring Covid cases in India have put paid to plans to invite the five Presidents of Central Asian states as Chief Guests for Republic Day, said sources though there was no official word from the Ministry of External Affairs.

Truncated Republic Day celebrations this year are yet another casualty of in-person diplomatic interactions due to another wave of the pandemic. Prime Minister Narendra Modi cancelled his visit to the UAE and Defence Minister Rajnath Singh to Vietnam for the same reason. The Prime Ministers of Russia and Nepal also called off their visits following the postponement of the Vibrant Gujarat summit.

Instead, the five Central Asian leaders will take part in a virtual summit with PM Modi on Republic Day to celebrate 30 years of establishment of ties.

This is the second year in a row when Covid has led to no overseas Chief Guest at the Republic Day parade.

The exponential rise in cases in the UK in January last year forced its Prime Minister Boris Johnson to call off his visit to India as the Chief Guest.

With pandemic-induced disruptions in one country or the other becoming the norm, diplomats and entrepreneurs have already taken to virtual conversations in a big way.

The visit of the Central Asian leaders would have capped intensive engagements that began during PM Modi’s first term and gathered pace in recent times following the takeover of Kabul by the Taliban.