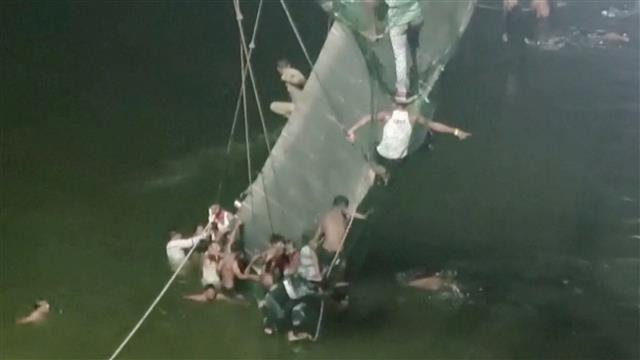 Former Gujarat Deputy Chief Minister Nitin Patel refuted claims of the Gujarat government having any direct or indirect role and said that the renovation and opening of the bridge were done by the Morbi administration. The Morbi bridge collapse incident claimed the lives of 134 people.

"Renovation and opening of the bridge were done by Morbi admin. Gujarat govt didn't have any role in it, direct or indirect. The old bridge was small and made for private use, but was opened to the public for tourist movement," said Former Gujarat Deputy Chief Minister Nitin Patel.

At least 132 people, including women and children, were killed and over 100 are receiving treatment for their injuries sustained after a cable suspension bridge in Morbi town collapsed on Sunday, plunging people into the Machchhu River.

Prime Minister Modi, in Kevadia, said that rescue operations were underway and there would be no laxity in rescue and relief efforts.

"The Gujarat Government has been carrying out relief and rescue operations since Sunday evening. Centre too is extending all help to the State Government," PM Modi said.

"The State Government has constituted a committee to investigate this incident. I assure the people of the country that there will be no laxity in rescue and relief operations," PM Modi said.

The Prime Minister said this while addressing a gathering on the occasion of the 147th birth anniversary of Sardar Vallabhbhai Patel in Ekta Nagar in Kevadia.

"I express my condolences to the families of those who lost their lives in the accident. In this hour of grief, the government is with the bereaved families in every manner. The Gujarat Government has been carrying out relief and rescue operations since the incident. Centre too is extending all help to the State Government," PM Modi said.

"I am in Ekta Nagar but my mind is with the victims of Morbi. Rarely in my life, would I have experienced such pain. On one hand, there is a pain-riddled heart and on the other hand, there is the path to duty," the prime minister said.

The prime minister said that Gujarat chief minister Bhupendra Patel had reached Morbi and has been holding the command of search and rescue operations since Sunday.

"The State Government has constituted a committee to investigate this incident. I assure the people of the country that there will be no laxity in rescue and relief operations," PM Modi said.

The Prime Minister who is on a three-day tour to Gujarat and Rajasthan also cancelled his roadshow to be held in Ahmedabad.

Prime Minister got emotional while addressing the audience as he laid the foundation stones of several projects worth over Rs 8,000 crore in Banaskantha's Tharad.

Addressing the audience during the event, PM Modi also remembered the deceased who died after the century-old suspension bridge collapsed in Gujarat's Morbi yesterday. "I am very distressed after the Morbi mishap," Modi said.

"I was distraught about whether to do the development programs or not. But because of your love and service and the 'Sanskar' of performing the duty, brought me here with a strong heart. Banaskantha means the whole of North Gujarat," PM Modi said in a breaking voice.