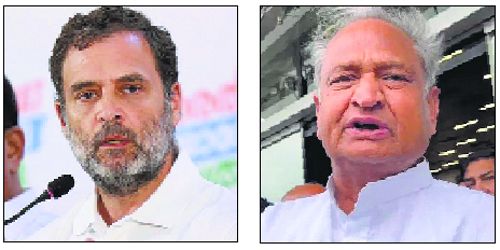 Veteran leader Ashok Gehlot is all set to file his nomination for the election of Congress president with Rahul Gandhi categorically telling the Rajasthan Chief Minister that neither he nor anyone from his family would contest.

Ahead of the commencement of filing of nomination on Saturday, Gehlot (71) formally declared his candidature, the first leader to do so, with sources close to him saying that he would file his papers after Monday (September 26). Gehlot announced his Congress presidential bid today after making a last-ditch attempt to convince Rahul to contest. This has set the stage for the election of the first non-Gandhi Congress chief in 25 years with Sitaram Kesri being the last in 1997 when he defeated Sharad Pawar and Rajesh Pilot. Sonia Gandhi replaced Kesri as party chief in 1998 and remains the longest-serving party president.

“Rahul Gandhi is steadfast on his 2019 position that he would serve the party but not hold any post. He had told the Congress Working Committee in 2019 at the time of resigning as the party president that he would perform every duty without being in any post. He is sticking to that stand. I will contest. That is certain,” Gehlot said today adding that Congress president Sonia Gandhi and AICC general secretary (Rajasthan) Ajay Maken would take a call on the issue of the state chief minister-ship should he get elected as the party president.

Gehlot returned to Jaipur tonight after paying obeisance at Shirdi in signals that he was gearing up for his new innings.

The Rajasthan CM had yesterday indicated that he would give up the CM-ship in the event of his election as the Congress president to do justice to the top post and would honour the one man, one post rule.

Meanwhile, veterans began pulling back from the contest as Gehlot advanced. Former Madhya Pradesh CM Digvijay Singh said he was not interested in becoming the party president; this just two days after remarking that he was not ruling himself out of the race. The Tribune has learnt that former Haryana Chief Minister Bhupinder Singh Hooda, who met Sonia at her residence today, will also likely back “old friend Gehlot” in the election.

Asked if he would run for the top position, Hooda said, “The Congress president has said she will remain neutral in the election. Anyone can contest. The filing of nominations starts tomorrow, but merely wishing to run for the post does not matter. Let us see who all finally enter the fray,” said Hooda. The former Haryana CM received a call for support from Gehlot, who appears to have already begun canvassing for the election, which is happening after 22 years. In the last election, Sonia Gandhi had defeated the late Jitendra Prasad bagging 7,448 votes against 94.

She has remained the party chief since, except briefly between 2017 and 2019 when her son Rahul was unanimously elected only to resign after the Congress’ Lok Sabha poll debacle in 2019 and leading to Sonia’s return as interim chief.

Not in race: Digvijay

Sonia Gandhi and AICC general secretary Priyanka Vadra will participate in the Karnataka leg of the ‘Bharat Jodo Yatra’, commencing from the month-end