Non-Jats too at Shamli meet 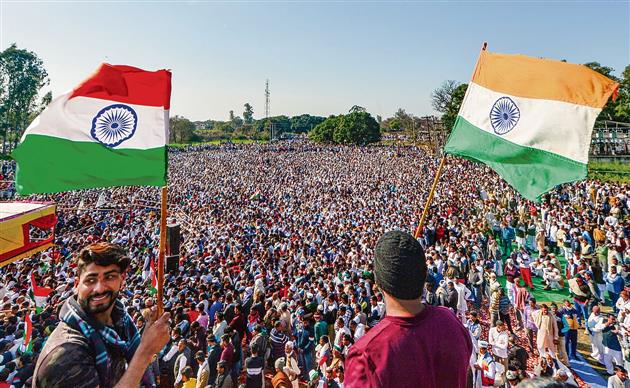 Farmers wave the Tricolour during a ‘kisan mahapanchayat’ in Shamli district of Uttar Pradesh. PTI

Amid the growing opposition to the Centre’s agri laws, thousands of farmers today turned up for a “kisan mahapanchayat” in western Uttar Pradesh’s Bhainswal village in Shamli. The protesters reached the village on tractors, two-wheelers, four-wheelers as well as on foot, defying prohibitory orders under Section 144 of the CrPC.

Ahead of the 2022 Assembly elections, this is the fourth major farmers’ meeting in western UP after Muzaffarnagar, Mathura and Baghpat. Sources say BJP’s rivals in the state are trying to make it an agitation regarding rural economy, not just farm economy, by including non-Jats, especially the Dalits.The meeting today was attended by members from “all castes and professions,” they say. So far, the protests against the farm laws have been led by ‘Jats’ and ‘Gujjars’, the land-owning castes.

Prof Sudhir Panwar, who belongs to Bhainswal and is affiliated with the Samajwadi Party, said: “The aim is to make it all about rural economy instead of agri economy. After all, non-farming castes in the village are largely dependent on farmers for their income.”

Meanwhile, the Haryana Government has extended the suspension of mobile Internet services in Sonepat and Jhajjar districts till 5 pm tomorrow in view of the three-hour “chakka jam” by farm unions. The farmers, however, say emergency and essential services will not be hindered.

Farmers’ leader Rakesh Tikait is expected to arrive at the Kitlana toll plaza in Charkhi Dadri on February 7 to participate in a mahapanchayat, Independent MLA and Sangwan khap pradhan Sombir Sangwan said.

The Centre has told Canada that remarks on its internal affairs by its top leaders, including PM Justin Trudeau, had the potential to harm bilateral ties between the two countries. TNS

UN Human Rights Commission has called for ‘max restraint’ by the govt & protesters. Amid Internet ban, it said peaceful assembly and expression should be protected offline and online.

Kin of a Pilibhit farmer, who died in a road mishap near Ghazipur, have been booked for allegedly insulting the Tricolour after a video of his last rites showed the body draped in the Tricolour.