Now, Pakistani warship on way to Colombo : The Tribune India 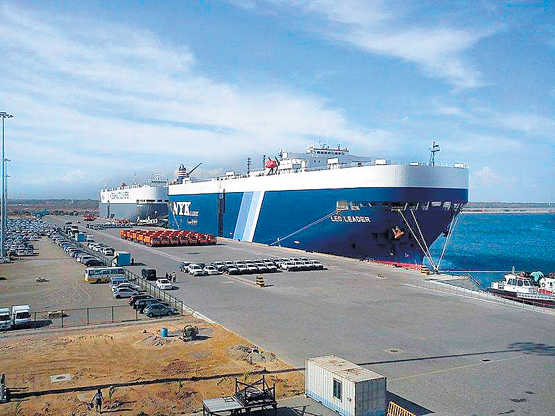 Hambantota port in Colombo, where the Pak warship will dock. File photo

While Sri Lanka has denied China permission for its spy ship to dock at Hambantota, it has allowed Pakistani guided missile frigate PNS Taimur to make a port call at Colombo while on its way to join the Pakistan Navy in Karachi.

The Pakistani warship was understood to have been denied permission to dock at Chattogram port as Dhaka said August was the month of mourning for Sheikh Mujibur Rahman, who was assassinated by Pakistan backed radical Islamist forces in 1975.

Bangladesh may not have wanted to ruffle feathers in Delhi as Prime Minister Sheikh Hasina is scheduled to make a trip to India in the first week of September. The operationalisation of several joint projects built with Indian assistance is crucial for Hasina's re-election bid in the upcoming Parliamentary elections. The Pakistan war vessel is coming from China, where it was built and had made its first port of call at Malaysia. The ship is expected to dock at Colombo port from August 12 to 15. Meanwhile, the Chinese research and survey vessel, Yuan Wang 5, is three days away from reaching Sri Lanka's Hambantota port.

Responding to reports that India has said the week-long docking of the Chinese vessel in Hambantota is a security concern, Chinese Foreign Ministry spokesman Wang Wenbin said it is "senseless to pressure Sri Lanka" citing security concerns.

"Sri Lanka is a sovereign state. It can develop relations with other countries in the light of its own development interests. China urges relevant parties to see its scientific explorations in a reasonable and sensible way and stop disturbing the normal exchange between China and Sri Lanka," Wang said.

Sri Lanka had changed its stance after External Affairs Minister S Jaishankar met his Lankan counterpart Ali Sabry in Phnom Penh and conveyed that India did not take kindly to the Chinese ship anchoring for a week in its backyard.

The conversation between the two ministers has led to a change of stand by Colombo. It is easier for the current regime to deny permission as the permission for the ship to arrive was given by then President Gotabaya Rajapaksha a day before he fled for Singapore.

Before this, Colombo had said the ship was only stopping at Hambantota for refuelling.

The government carefully monitors any development having a bearing on India's security and economic interests and takes all measures to safeguard them. — Arindam Bagchi, external affairs ministry spokesperson