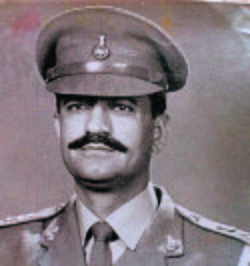 Architect of the military defence of Poonch during the 1971 Indo-Pak war, Maj Gen KL Rattan (retd) breathed his last in Noida.

Awarded the Mahavir Chakra, the second highest battle honour, he led the 6th battalion of the Sikh regiment to push back Pakistan troops. The action earned the unit “Theatre Honour” of J&K and Battle Honour “Defence of Poonch 1971”.

In 1971, then Lt Colonel Rattan, who hailed from Una in HP, defended the strategically important town of Poonch against numerically superior Pakistani force.

Pakistan attacked India’s western front. Its brigades comprising 5 Frontier Force Rifles, 7 PoK battalions and 51 Punjab Regiment were given the task of capturing two pickets—405 and 406 of Banwat Heights—besides the Poonch helipad, which were held by the 6 Sikh Battalion.

From December 3 to 6 in 1971, the enemy launched a series of attacks, but was pushed back.