Government begins assessment of losses on persons and of property, to weigh public sentiment on todad’s violence before making the next moves 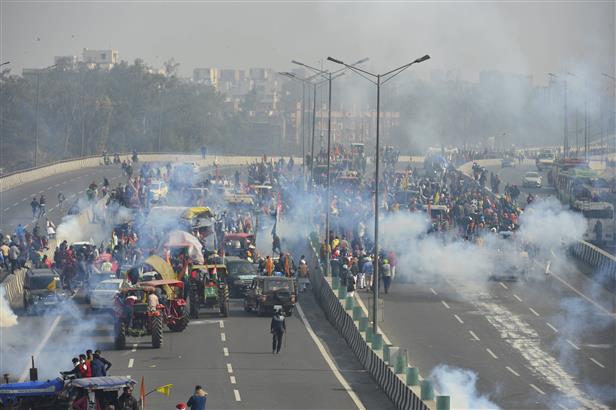 Police fire teargas shells to disperse protesting farmers who were attempting to break barricades at Ghazipur border during their tractor march on Republic Day. PTI

Major opposition parties on Tuesday united against the government blaming its insensitivity for the capital siege by farmers on Tuesday and demanded immediate repeal of the farm laws that have agitated the protesters for over 61 days now.

The Congress, NCP and Trinamool Congress led the charge against the BJP government and termed the developments in Delhi as “painful”.

While the Congress said there was no place for violence in a democracy, TMC chief Mamata Banerjee said the developments in Delhi were worrying and painful.

NCP’s Sharad Pawar too laid the blame at the Centre’s doors asking why the government could not secure the capital and anticipate the violence.

CPM’s Sitaram Yechury slammed the Centre for mishandling the farmers’ issues and said the Republic is of the public and the tantra (establishment) in Ganatantra has no meaning without the gana (people).

“The farmers’ protests are for a legitimate demand of millions. That remains the issue at hand and must be resolved,” Yechury said adding that violence in any form is unacceptable.

All opposition stalwarts went on to seek the repeal of farm laws blaming today’s developments in the “undemocratic passage of the legislations”.

“Non-violence is the biggest strength of the farmer agitation. We hope that this farmer-labourer alliance will remain committed to peaceful means for the repeal of the anti-agriculture laws,” said Surjewala asking the government if it was justified in holding inconclusive talks with farmer leaders without ever heeding to their demands of repeal.

“It is clear that the people are anguished with the government and the 61-day-old face-off between the people and the system is not good for our democracy. The abiding message of the Republic Day is that the government must listen to the people, shun its arrogance and rescind the laws,” said the Congress general secretary referring to the 61-day peaceful farmer’s agitation and the death of 175 farmers in the process.

West Bengal CM Mamata Banerjee said the government had been extremely casual in dealing with the farmers and must repeal the laws now.

That said, the opposition remains in a wait and watch mode and is hoping the agitation redeems its reputation as peaceful and genuine, as the Budget Session of Parliament approaches.

All eyes are on the morchas parked at Delhi’s borders to see if they can tame the unruly elements that have infiltrated the protests. This remains a challenge after Samyukta Kisan Morcha failed miserably in ensuring a peaceful tractor parade today.

Although the Morcha abruptly called off the tractor parade this evening, the question everyone was asking is who is listening to them.

The government for its part is waiting for things to pan out in the coming days with the Delhi Police earning praise across social media for restraint in the face of grave provocations today.

The police released a list of 41 personnel injured in the clashes with the farmers and has begun assessing losses on persons and of property.

The government will weigh the public sentiment on the matter before making the next moves as the law takes its course against elements that ran rampage in the capital on Republic Day.

Farm unions for their part returned to the borders tonight to mull what went wrong and how to reclaim the narrative.