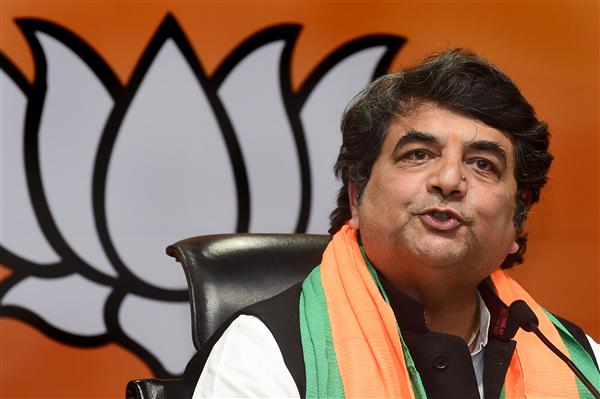 Moments after senior leader RPN Singh joined the BJP on Tuesday, the Congress said the ideological battle it was fighting was “not meant for cowards.”

Downplaying the exit of a UP heavyweight and former minister of state for home in the UPA government, Congress spokesperson Supriya Shrinate said, “It has been brought to my notice that the leader is quitting. I still do not know where he is joining….”

She said the Congress’ fight was against government’s resources and agencies.

“It is a battle of ideology, a battle for truth and to fight a battle as strongly pitched as this one you have to fight with courage. You have to fight with a lot of dedication. I do not think this battle is meant for cowards. Like Priyanka Gandhi has said, you need to be on your toes, you need to be full of courage. You cannot be a coward and fight this battle. From this platform, of course, I would like to wish him a glorified career ahead and the very best,” Shrinate said, quoting her leaders.

RPN, 57, the sitting AICC in charge for Jharkhand, member of the Congress Working Committee and star campaigner of the party in UP (declared only yesterday) follows in the footsteps of young leaders like Jyotiraditya Scindia, Jitin Prasada, Sushmita Dev, Priyanka Chaturvedi and Lalitesh Tripathi who quit the grand old party for varied options.

In fact, RPN served in the UPA council of ministers with Scindia and Prasada, who have both since joined the BJP. Scindia is union aviation minister and Prasada is a minister in BJP ruled UP.

Although the Congress dismissed the exit, RPN, a prominent OBC leader from eastern UP, holds sway in Kushi Nagar which adjoins UP CM Yogi Adityanath’s parliamentary constituency Gorakhpur.

A scion of the royal Sainthwar family of Kushi Nagar, RPN has been three time MLA (1996 to 2009) from Padrauna in Kushi Nagar Lok Sabha segment.

The former Congress leader won the Kushi Nagar LS seat in 2009 and became a minister in UPA. He lost the seat in the 2014 and 2019 general elections.

Considered close to the Gandhis, RPN became AICC secretary in 2003 having earlier been UP Youth Congress president.

He fell out with the Gandhis of late and was known for speaking freely at CWC meetings. At the meeting held to discuss the Abrogation of Article 370 in J&K, RPN advocated sensing the public mood in favour of the move. He earlier argued that personal attacks on PM Narendra Modi were not helping.

Much of Rahul Gandhi’s political offensive has involved attacking the PM’s image.

Gandhi siblings have long maintained that those who want to leave the party can leave because they do not seem prepared for the long haul of an ideological battle.