Over 75 lakh being fed at food camps: MHA : The Tribune India

Over 75 lakh being fed at food camps: MHA 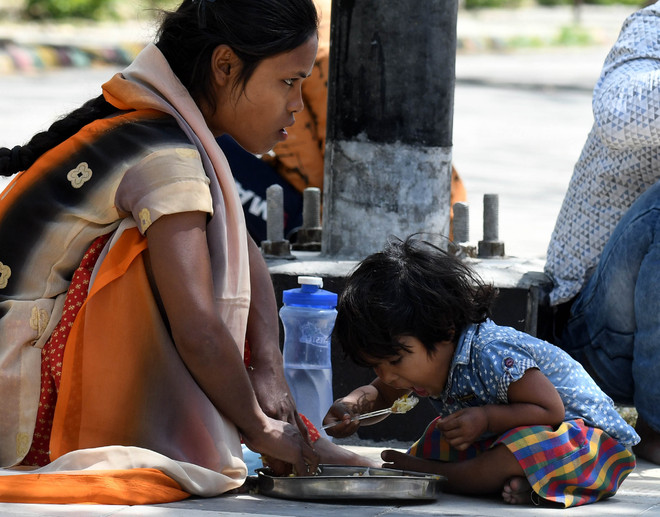 Over 12.5 lakh homeless migrants have been shifted to 28,000 migrant relief camps across India amid the Covid crisis, Joint Secretary Punya Salila Srivastava, Ministry of Home Affairs (MHA), said today. Also, over 75 lakh people were being provided food in various states and UTs.

“The MHA has been continuously monitoring the enforcement of lockdown measures across all states and UTs,” she said, asserting that the supply of essential goods and services was satisfactory. “A total of 27,661 migrant relief camps have been set up in states and UTs — 23,924 by the government and 3,737 by NGOs. At least 12.5 lakh migrant workers have been provided shelter in these camps,” Srivastava said.

Besides,19,460 food camps had been set up in various states/UTs — 9,951 by the government and 9,509 by NGOs — where over 75 lakh were being fed, she said. These facilities were for the poor, the destitute and migrant workers.

Addressing the media,along with the Union Health Ministry, Srivastava said 13.6 lakh workers were being provided food and shelter by their employers.

The government on Sunday directed all district officials to ensure that pharma units making devices and medicines ran seamlessly, a day after India imposed curbs on exports of most diagnostic kits

The Vishwa Hindu Parishad (VHP) called for a ban on the Tablighi Jamaat and its Nizamuddin Markaz on Sunday, after it emerged as a Covid-19 hotspot in the country.

Flights to resume in phases

The government is likely to allow domestic and international flight operations in a staggered manner post the 21-day lockdown period, slated to end on April 14, officials said on Sunday.