Oxygen Express: Delhi to receive 244 tonnes of oxygen on Wednesday

So far, the Indian Railways has delivered around 1,585 tonnes of LMO in 103 tankers to various states 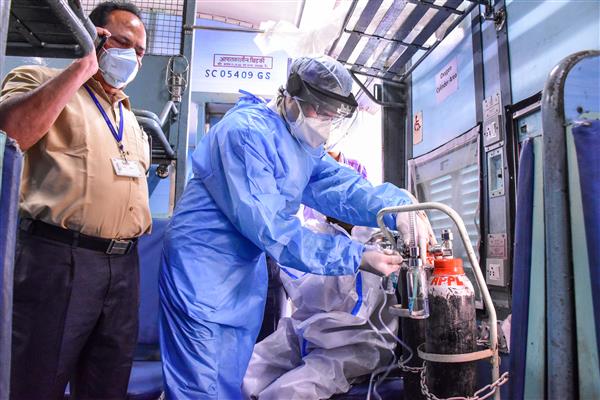 Delhi will receive 244 tonnes of liquid medical oxygen (LMO) on Wednesday and with this, the total amount delivered to the city in 24 hours will be nearly 450 tonnes, the railways said.

On Tuesday morning, ‘Oxygen Express’ trains from Hapa in Gujarat and Durgapur in West Bengal delivered 85 tonnes and 120 tonnes of LMO to the national capital.

The railways said two more trains, one from Mundra in Gujarat and another from Hapa, carrying 140 tonnes and 103.6 tonnes of LMO, respectively, will reach Delhi in the early hours of Wednesday.

“With this, ‘Oxygen Express’ trains would deliver nearly 450 tonnes of liquid medical oxygen to Delhi alone in 24 hours, counting from deliveries that took place in the early hours of today,” it said.

The total daily quota of oxygen for the city is 590 tonnes.

So far, the Indian Railways has delivered around 1,585 tonnes of LMO in 103 tankers to various states.

Twenty-seven ‘Oxygen Express’ trains have already completed their journey and six more carrying around 463 tonnes of LMO in 33 tankers are on way to their destinations, the railways said.

Telangana has received its second ‘Oxygen Express’ carrying 60.23 tonnes of LMO from Angul in Odisha. Lucknow will receive on Tuesday 79 tonnes from oxygen Bokaro in Jharkhand.