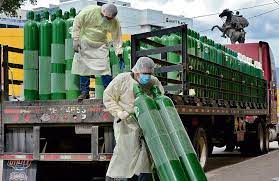 The oxygen requirement during the current Covid-19 wave stands at a nominal 23.4 per cent in comparison to the demands in the first and the second wave as high as 63 per cent and 74 per cent, respectively, said a study conducted by Max Healthcare on all admitted patients across the hospitals.

During a phase when Delhi recorded 28,000 positive cases per day in the second wave last year, hospitals across the city were full and no ICU beds were available.

In comparison to that, in the third wave, when the national capital recorded its highest around 28,000 positive cases in a single day, the hospital Covid occupancy is at less, as per the study.

The overall mortality in the first wave was at 7.2 per cent which increased to 10.5 per cent during the second wave. However, only 6 per cent mortality in Covid-19 patients during the ongoing wave has been recorded at hospitals.

Talking to IANS, Sandeep Buddhiraja, Group Medical Director, Max Healthcare, who conducted the study, said: "Two important points have been observed from the study. One is that total admissions during this wave have been very less. The second point is that out of total admitted patients in hospitals during the second wave, around 70 to 80 per cent needed the oxygen support. However, in this wave only 20 to 30 per cent of total admission have needed the oxygen support which indicates that the infection is not much severe this time." Dr Buddhiraja added that despite the fact that less people needed hospital admission this time, at least 40 per cent needed hospital care because of multiple medical problems and comorbidities.

Among the paediatric admissions across hospitals, only 41 children below 18 years have been admitted. However, no deaths have been reported in this age-group.

On being asked about the children hospitalisation trends in this wave, Buddhiraja said no such rising trends of kids hospital admission have been observed so far. IANS