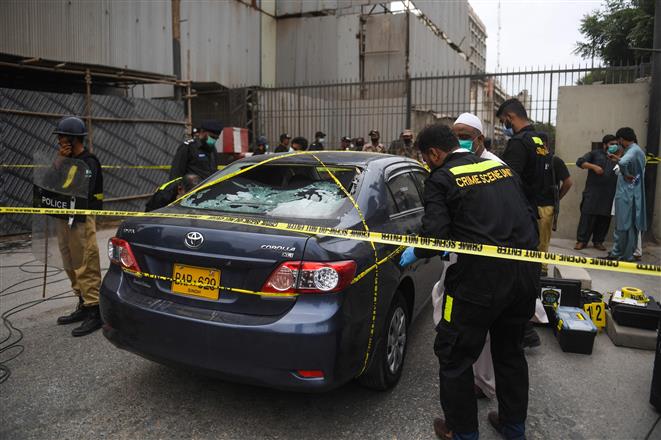 Policemen guard as members of Crime Scene Unit investigate around a car used by alleged gunmen at the main entrance of the Pakistan Stock Exchange building in Karachi. AFP

“Pakistan cannot shift the blame on India for its domestic problems,’’ he said on the attack that left several dead.

The MEA had earlier condemned the attack but taken umbrage to Pakistan PM Imran Khan and Foreign Minister Qureshi claiming that the clues of the terrorist attack are “leading towards India’s activated sleeper cells’’.

Unlike Pakistan, India has no hesitation in condemning terrorism anywhere in the world, including in Karachi, Srivastava had pointed out while asking Qureshi to reflect on his own Government’s position, including his Prime Minister’s description of the global terrorist as a “martyr”.”

India has also rejected Qureshi’s claim that Islamabad wants to open the Kartarpur Corridor but India was making attempts to disrupt the law and order situation in Pakistan. India says it was forced to turn down Pakistan’s offer to open the Corridor at a short two-day’s notice on health and technical grounds. The Covid epidemic was still raging and with the season of heavy rain approaching, Pakistan had still not constructed a bridge over an estuary of the Ravi River which could get flooded and leave the pilgrims stranded.