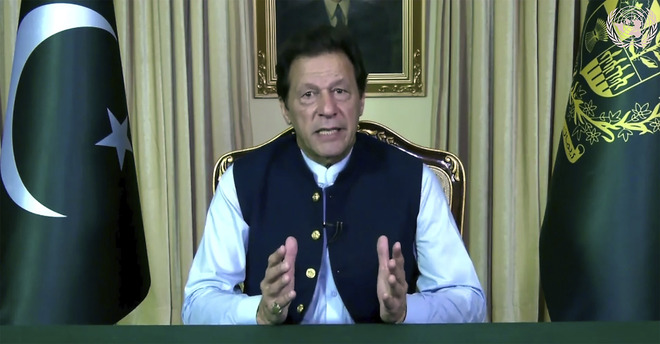 India walked out of the UN General Assembly on Friday as Pakistan Prime Minister Imran Khan held out the threat of a nuclear war. He also urged the United Nations Security Council (UNSC) to enforce its resolutions on Jammu & Kashmir by ensuring a referendum as was the case with East Timor in 1999.

Shrugging off accusations of sponsoring terrorism in J&K by describing the violence as “indigenous” arising from “Indian occupation”, Khan warned India of playing a “dangerous game of upping the ante against Pakistan in a nuclearised environment”.

Nepal PM KP Sharma Oli extended an olive branch to India at the UN meet. In his address, Oli backed India on its proposal for a common definition of terrorism

Speaking at the UN General Assembly via videoconference, Khan went over much of the ground he covered in his last address on the same occasion. He began by donning the mantle of a statesman by speaking of gradual erosion of the ideals that built the United Nations, the need for debt relief and climate change.

However, Imran veered into the neighbourhood shortly and attacked the RSS for promoting Islamophobia.