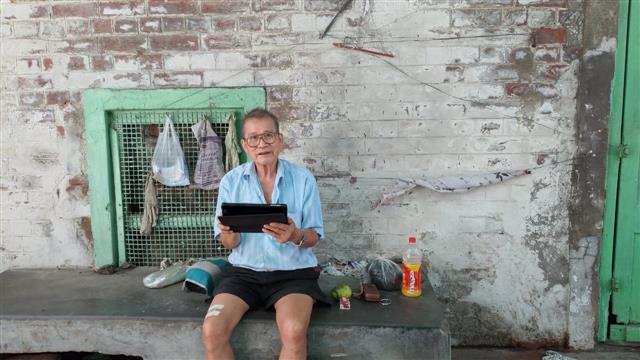 Chung (73), is an inhabitant of Kolkata’s Chinatown located in the Tangra area of the city.

“Have you seen the temple of the Goddess Kali? We have set it up. Earlier people used to dump garbage in the area where the temple now stands. A priest comes to the temple twice every day and offers puja,” says Chung (73), an inhabitant of Kolkata’s Chinatown located in the Tangra area of the city.

The “Chinese Kali Mandir”, dedicated to the popular Hindu goddess, is just a stone’s throw away from Chung’s residence. With his children settled in Canada and his restaurant closed due to the lockdown, Chung, whose parents had come to Kolkata from China, passes time having endless cups of tea supplied by the neighbourhood chaiwallah and gazing at photographs of grandchildren sent to him from Toronto. “I do not want to shift to Canada. I like it being here. I was born in Kolkata in 1947 when the country became independent,” the septuagenarian restaurant-owner says proudly.

Global Times, an English tabloid brought out from Beijing by the ruling Communist Party of China (CPC), recently ran a story with the headline “Chinese in India say they are being harassed amid rising anti-China sentiment following border clash”.

Quoting unnamed sources, the daily described how the campaign against Chinese products and other anti-China protests taking place in the country were making Chinese people living in India nervous.

However, contrary to the claim made by the Beijing paper, residents of Kolkata’s Chinatown, which boasts of having the largest concentration of people of Chinese origin in the country, do not betray any feeling of insecurity.

“We are Indians. I was born here and I am going to be buried here one day,” says Katy Ku, an elderly Chinese origin woman, when asked if she ever thought that the recent conflict between the two armies could prove costly for her and others of her ethnicity living in the area.

A tour of the neighbourhood makes it clear that more than the Galwan Valley flare-up, it is the coronavirus pandemic originating in China that poses a bigger problem here.

A large number of people in the locality earn their livelihood from the restaurant business. The lockdown ordered to arrest the spread of the virus and the consequent closure of restaurants has dealt those associated with the business a crushing blow.

“The border clash has no impact on us. But the lockdown has. I was working in a restaurant but lost my job,” said Hsiung, a middle-aged man of Hakka Chinese origin.

Lee, an elderly man of Chinese origin man and Thomas, a young inhabitant, also reported having lost their jobs as a result of the lockdown.

Residents admitted having seen on television pictures of smashing of Chinese products and other anti-China protests but said that they did not feel threatened by the protests.