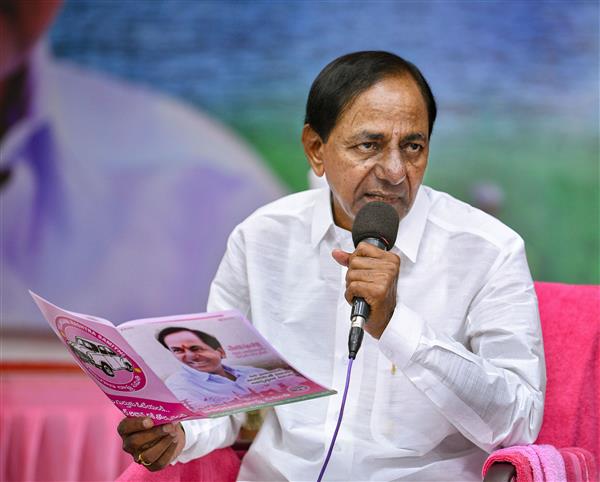 Led by Chief Minister K Chandrashekar Rao, TRS leaders will on Monday hold a ‘dharna’ in Delhi—the first since the bifurcation of Andhra Pradesh, say leaders —to demand 100 per cent procurement of Telangana paddy by the Centre.

The state wants 100 pc procurement “like Punjab”, TRS leaders said even as the BJP-led Centre has put up its hands on procuring parboiled rice— an issue which has turned into a major issue ahead of the state polls in 2023.

TRS leader Kalvakuntla Kavitha said her party is all set to protect the interest of Telangana farmers in light of “indifferent behaviour of the Centre on paddy procurement”.

“The policies of the Central Government are a threat to the national food security system and TRS will fight for the interest of the farmers,” she said, warning the BJP of the perils of “ignoring” farmers.

While it remains to be seen whether opposition parties will join KCR, party leaders confirmed the presence of BKU leader Rakesh Tikait at the dharna in the Capital.

While there has been talk of an “action plan for alternative cropping” to put an end to the production of parboiled rice, observers accuse “all political sides and lobbies, including millers, of using the issue for personal and political gains while farmers suffer”.

“To declare Telangana ‘rice bowl’ of the country without considering the demand was not prudent,” they said.

Meanwhile, the state BJP, too, is making the most of the situation, accusing the state government of not procuring paddy from farmers.

Notably, paddy produced between November and April is processed as parboiled (partially boiled and dried) because high temperatures in summers lead to the breakage of raw rice. If the rice is not parboiled, the recovery rate can be quite low, experts say.

Though the state has asked farmers to undertake paddy cultivation during Rabi “at their own risk” and only if they have arrangements with millers or for self-consumption, observers say that farmers prefer paddy because of irrigation facilities and as it is less labour intensive.

Telangana has seen a massive rise in production of paddy due to the government’s irrigation projects and schemes. While Telangana does not consume parboiled rice, states which do, like Kerala, Tamil Nadu, and Bihar, have increased its production, making the handling and distribution of Telangana variety unviable.