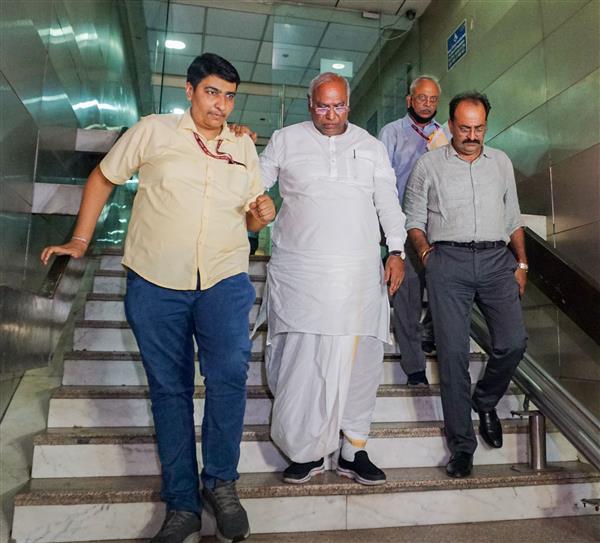 Both Houses of Parliament were adjourned on Thursday following serial disruptions over Enforcement Directorate (ED) summons to Congress veteran Mallikarjun Kharge, which the party slammed as “an intimidation tactics”. The government, on the other hand, rejected the allegations, saying it did not interfere with the functioning of law enforcement agencies.

Democracy can’t thrive like this. Aim is to demoralise, destroy and intimidate us. Mallikarjun Kharge, Congress Veteran

If anyone has done any wrong, the law will take its course. Piyush Goyal, Union minister

Congress leaders Digvijay Singh and Pramod Tiwari said the party MPs would march to Rashtrapati Bhavan on Friday to agitate against inflation.

The political face-off commenced as soon as the Houses met, with Leader of the Opposition in the Rajya Sabha Kharge informing members that he had been asked to appear before the ED at 12.30 pm. He asked if it was fair for the agency to summon him when the session was on. Other Opposition leaders alleged that the central probe agencies were being misused.

“Congress leaders should face the law instead of running away,” leader of Rajya Sabha Piyush Goyal said after Kharge’s charge that ED summons were meant to “demoralise and frighten the Congress”. Minutes before presenting himself before the ED, which resumed search operations at the office of Young Indian (YI), holding company of Congress-owned National Herald newspaper which had been sealed yesterday, Kharge said in the RS, “If we carry on like this, will our democracy live? Will we function as per our Constitution? This is being done purposely to demoralise, destroy and intimidate us.”

Goyal rejected the accusations as baseless. “Whatever the Leader of the Opposition has said is totally baseless. The matter has gone to the Supreme Court. Congress leaders are on bail and they and the LoP should follow the law instead of running away.... Their government used to interfere in the functioning of law-enforcement agencies,” said Goyal.

Kharge (80) reached the Young Indian office around 12.40 pm and met ED officials, who had sought his attendance during raids at the YI in his capacity as the “principal officer” of the company. A senior ED official said Kharge’s presence was needed for “clarification” by search teams with regard to documents or other evidence.