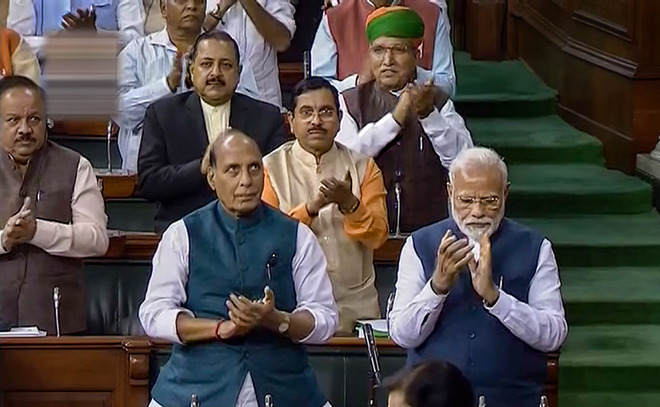 PM Narendra Modi and others clap as a gesture to show gratitude to health practitioners at Lok Sabha on Monday. PTI

Both the Houses of Parliament was adjourned sine die prematurely today after completing the mandatory financial businesses in view of increasing threats from coronavirus outbreak.

A decision in this regard was taken after the government relented on its view that Parliament would complete its Budget session till April 3.

Lok Sabha was adjourned sine die within minutes of its convening for the day today. The House passed the Finance Bill, thus completing the Budget exercise. The Bill was passed by voice vote without having discussion on it and reply by Finance Minister Nirmala Sitharaman.

However, opposition parties had demanded that the FM announce a package for the states and those affected by the spread of Covid-19, and subsequent job loss due to the lockdown. But the government did not make any announcement in this regard.

Rajya Sabha too was adjourned sine die after the House passed and returned two legislations — the Jammu and Kashmir Appropriation Bill and the Finance Bill — to Lok Sabha. As soon as the House assembled for the day at 2 pm Rajya Sabha Chairman M Venkaiah Naidu announced that the House will be adjourned sine die after completion of the business including financial matters listed for the day.