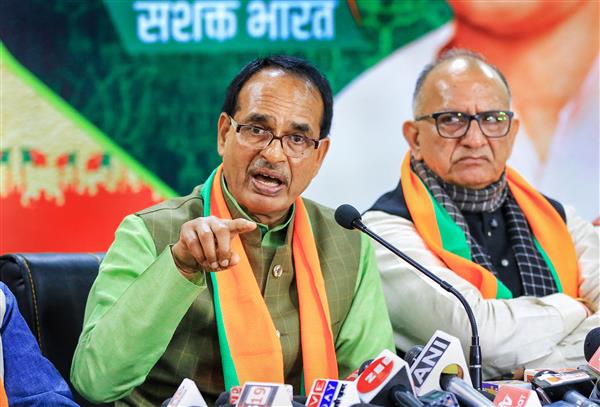 Continuing the tribal outreach and accusing Congress of crediting only one family for achieving Independence, Madhya Pradesh Chief Minister Shivraj Singh Chouhan announced to name Patalpani railway station in Indore and two other landmarks in that city after tribal icon Tantya Bhil.

Accusing the previous governments of ignoring the tribal history, Chouhan on Monday said that Indore’s Bhanwar Kuan intersection and MR 10 bus stand, being developed at the cost of Rs 53 crore, will also be named after Tantya Bhil.

“Like Bhopal’s Rani Kamalapati station, Patalpani railway station (in Indore district) will be named after Tantya Bhil, who had sacrificed his life,” Chouhan said while addressing a tribal gathering, marking the conclusion of the week-long ‘Janjatiya Gaurav Diwas’ celebrations.

On the occasion of the ‘Janjatiya Gaurav Diwas’ on November 15, which was observed on the birth anniversary of revered tribal leader and freedom fighter Birsa Munda, Prime Minister Narendra Modi had taken a veiled swipe at Congress saying previous governments had ignored the history and contribution of tribals.

Chouhan said tribes in the country and Madhya Pradesh have a glorious past and tribal heroes played a very important role in the freedom struggle. The British had made all efforts to end the pride of our tribes. The state government will restore that pride, he added.

“The history about the contribution of the Gondwana kingdom in the freedom struggle and battle against the Mughals was not taught properly. The wrong history about the freedom struggle was taught and they talked only about one family saying we got freedom because of Nehru ji (Jawaharlal Nehru) and Indira ji (Indira Gandhi). The contribution of tribal icons like Raja Shankar Shah, Raghunath Shah, Tantya Mama (Bhil), Bhima Nayak was never told,” he alleged.

Chouhan said “petty and false” cases against tribals will be withdrawn.

“Youngsters from tribal communities would be trained so that they can clear the competitive Army recruitment exams,” he said.

The CM said a medical college will be opened in Mandla in the name of king Hirde Shah, a freedom fighter.

Known as the “Indian Robin Hood” by tribals, Tantya Bhil is hailed as one of the revolutionaries who waged an armed struggle against the British rule for 12 years. It is said that Tantya used to loot the treasuries of the British government and distribute the wealth among the poor. PTI