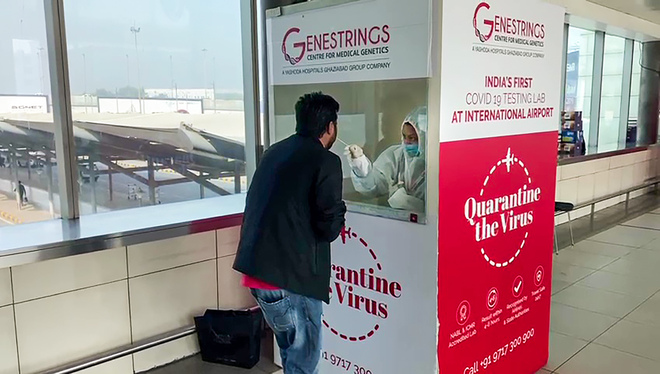 A passenger gives his sample at a kiosk at the Delhi airport. PTI

Data from phase 2 trials of Covaxin, country’s first indigenous Covid vaccine candidate, has shown the jab was well tolerated across all ages groups, produced cell mediated immune response and did not show any serious adverse event.

‘No mutant strain in India’

Bharat Biotech and ICMR, collaborators for the Covaxin candidate, have now published the results for phase 1 and phase 2 trials with the late stage phase 3 trials progressing well. The results are still to be peer reviewed though.

“In phase 1 trial, the vaccine (BBV152) produced high level of neutralising antibodies that remained elevated in all participants three months after the second vaccination. In the phase 2 trial, BBV152 led to tolerable safety outcomes and enhanced cell-mediated immune responses,” the latest data show.

The researchers are going with the 6 µg formulation for phase 3 efficacy trial after trying the 3 ug formulation in the first two stages. “In a follow-up of the phase 1 trial, the vaccine candidate produced high levels of neutralising antibodies that remained elevated in all participants three months at day 104 after the second vaccination. Based on these results, we hypothesise that the vaccine can generate antibodies that may persist for six to 12 months,” the research shows.

Bharat Biotech is among the three companies to have sought emergency use approval in India.