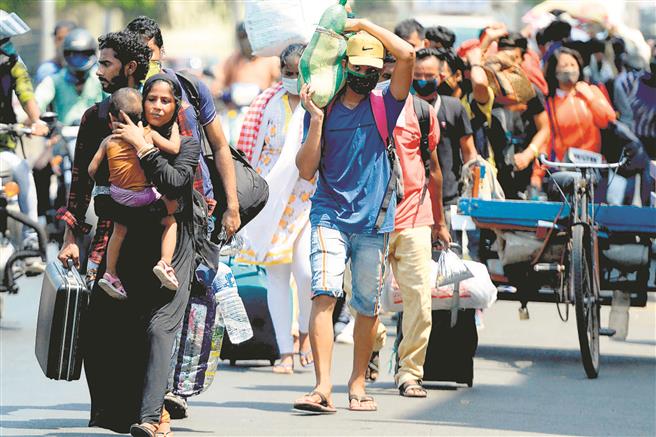 Stranded migrant labourers from Bihar on their way to a railway station in Chennai. AFP

A number of activities, including religious places and shopping malls, will be allowed to open in the country in a phased manner, except in designated containment zones, as the government today came out with a month-long plan to ease lockdown measures beginning June 1. The lockdown, fourth phase of which was slated to end on Sunday, will continue in containment zones till June 30.

An order issued by the Ministry of Home Affairs (MHA) says the new guidelines will come into effect from June 1 and will be effective till June 30 and during the period, the focus would be on the “re-opening of areas outside the containment zones”.

The MHA said the first phase of reopening (Unlock 1) will have economic focus. After the completion of Lockdown 1.0, during which only essential activities were permitted, there have been decisions on relaxing measures in a graded manner while keeping in mind “the overarching objective of containing the spread of Covid-19”.

In its order, the MHA said: “There shall be no restriction on inter-state and intra-state movement of persons and goods. No separate

permission/ approval/ e-permit will be required for such movements.”

But in case a state/ UT, based on reasons of public health and its assessment of the situation, proposes to regulate movement of persons, it will give wide publicity in advance regarding the restrictions to be placed on such movement, it added.

It is also said states and UTs, based on their assessment, may prohibit certain activities outside the containment zones, or impose such restrictions as deemed necessary.

Meanwhile, ‘night curfew’ “shall continue to remain in force, on the movement of individuals, for all non-essential activities and the revised timings for the same will be from 9 pm to 5 am, it said.

The MHA, however, said: “Lockdown shall continue to be implemented strictly in the containment zones. These will be demarcated by the state/UT governments, after taking into consideration the guidelines issued by the Health Ministry. Within the containment zones, strict perimeter control shall be maintained and only essential activities will be allowed.” The curbs were first announced on March 24 for 21 days. The lockdown was first extended till May 3 and then again till May 17. It was extended till May 31 and now has been extended in containment zones till June 30.

Chandigarh: Punjab Chief Minister Capt Amarinder Singh announced a four-week extension of the lockdown till June 30. He said his government would take into account the Centre’s guidelines for lockdown 5.0. Underlining the need to exercise extreme caution, he lauded citizens for following health norms to help the state government in containing the disease spread.

Getting back to normal | Movement from 5 am to 9 pm

Phase I What opens from June 8

Phase II What may open in July*