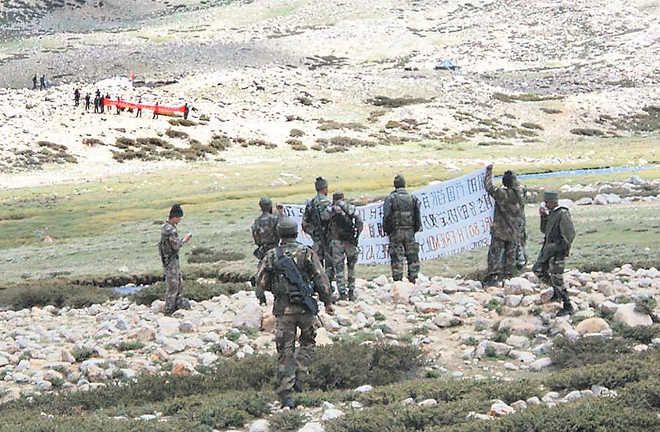 Even as a Major General-level meeting between Indian and Chinese armies was held for the third time at Ladakh on Thursday for disengaging the troops, both sides continued to keep up their military posturing across the Line of Actual Control (LAC) and even build up additional resources and manpower at select sensitive spots.

Edit: Too little, too late

China has made several military structures in the Galwan valley. It has also attempted to build a barrier in the Galwan river so that it can hold and release water at will which can possibly threaten bridges on the 255-km Darbuk-Shyok-Daulat Beg Oldie road.

We expect the Chinese side to confine its activities to its side of the LAC. —MEA spokesperson

So far, the People’s Liberation Army (PLA) has not moved out of the Galwan valley or the ridgelines around it. More than 1,000 troops of each side are still in the valley that is stretched over 6 km. China on Tuesday had claimed that the entire Galwan valley belonged to it. India has categorically rejected that official statement.

The two sides, however, have disengaged from the spot of the clash. The Indian side is seeking that all personnel of the PLA withdraw or disengage from the wider area of the Galwan valley. The fresh satellite imagery with the government shows that China has added to military structures east of ‘Finger 4’ which is north of the Pangong Tso (a 135-km lake).

Meanwhile, the Indian Army in response to a news report in a US-based newspaper, said: “No Indian soldier is missing in action after the clash on the night intervening June 15 and 16.” The newspaper had claimed some soldiers were missing.

This was the third consecutive day of meetings at Galwan. Talks between the two sides near the valley ended in a stalemate on Tuesday as well as Wednesday, sources said.

On Wednesday, the two sides discussed ways to implement the disengagement of troops from the region as agreed to during a high-level military dialogue on June 6. — TNS

Despite the tensions with China, India will take a $750 million loan from the Beijing-headquartered Asian Infrastructure Investment Bank to strengthen its response to the adverse impacts of Covid on the poor. TNS