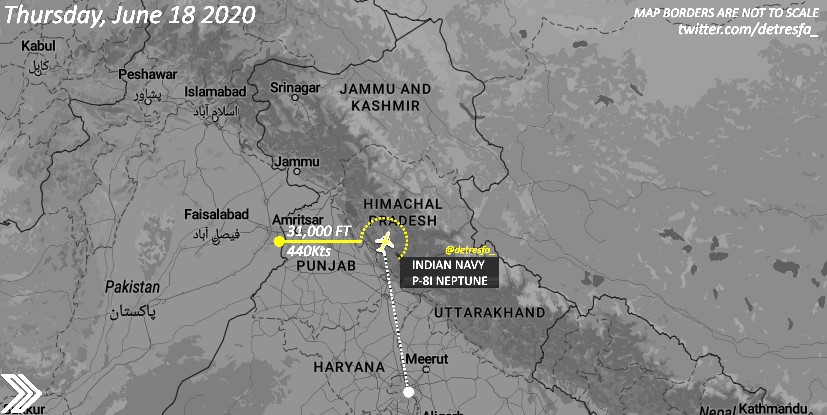 IAF midair refuellers, that are based at Agra, have also been tracked flying in the northern sector recently by some plane spotting sites.

Amidst a protracted and violent face-off between Indian and Chinese troops in Galwan Valley, aircraft spotters have posted an aerial track of the Indian Navy’s Boeing P-8I surveillance aircraft heading towards Ladakh, on social media platforms.

An image posted on micro-blogging site Twitter today morning shows a P-8I heading from New Delhi flying over Himachal Pradesh and headed in the direction of the zone of the conflict along the Line of Actual Control (LAC). The aircraft is shown at an altitude of 31,000 feet and speed of 440 knots or roughly 800 kmph.

IAF midair refuellers, that are based at Agra, have also been tracked flying in the northern sector recently by some plane spotting sites.

Built on a Boeing 737 airframe, the P-8I is a long-range anti-submarine and anti-surface warfare platform used for intelligence, surveillance and reconnaissance missions as well as for other critical missions like search-and-rescue, anti-piracy and supporting operations of other arms of the military.

In February this year, Chief of Defence Staff, Gen Bipin Rawat had revealed that the P-8 aircraft had also been deployed to carry out extensive surveillance on the movement and deployment of Chinese troops during the 73-day-long standoff between India and China at Doklam on the tri-junction of India-Bhutan-China in the east in 2017.

The person who had posted Thursday’s image of the Naval P-8I had on Wednesday re-tweeted satellite pictures of escalating build-up of Chinese forces on May 19 showing armoured personnel carriers, self-propelled artillery, command posts, trucks and other equipment about 43 kms south east of the LAC in Galwan Valley area.

According to sources, the Navy’s P-8Is have been used on surveillance missions in support of the Army in various sectors on earlier occasions, including during the current stand-off in Ladakh as well as in the aftermath of the Pulwama terror attack. They use the synthetic aperture radar, inverse synthetic aperture radar, electro-optic instruments and infrared to map surface areas as well as their onboard electronic warfare suites to scan the electromagnetic domain.

The P-8Is were inducted into the Indian Navy in 2013, Of the 12 aircraft ordered so far, India has received eight, making India the second largest operator of this aircraft in the world. Another four aircraft are on-schedule to be delivered in 2020. The Navy operates these aircraft with Indian Naval Air Squadron 312, The Albatross, at INS Rajali near Arakkonam in Tamil Nadu.