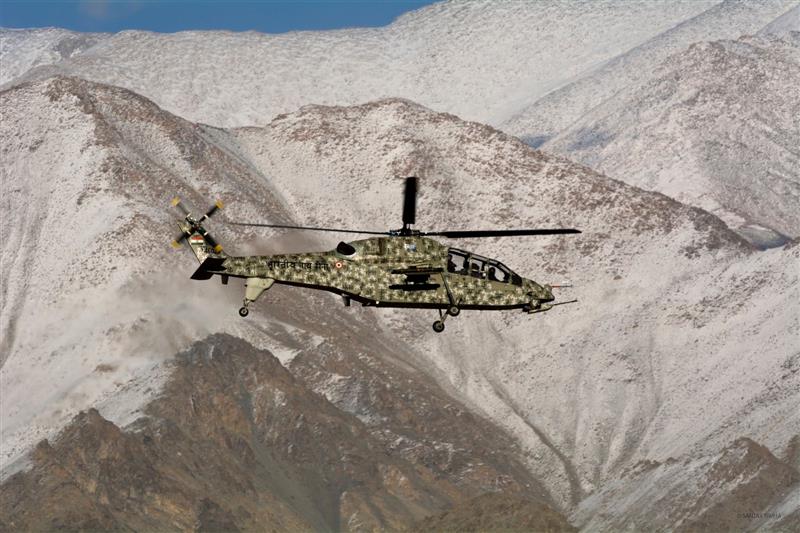 India which became known as an importer of arms has now adopted the mantra of “Make in India, Make for the World” to turn the country self-reliant in the defence sector, Prime Minister Narendra Modi said on Friday as he handed over some indigenously developed defence platforms to the armed forces.

At an event in Jhansi in poll-bound Uttar Pradesh, Modi formally handed over light combat helicopters (LCH) designed and developed by Hindustan Aeronautics Limited (HAL) to the Air Force chief, drones and UAVs built by Indian start-ups to the Army Chief, and the DRDO-designed and Bharat Electronics Limited-manufactured advanced electronic warfare suite for naval ships to the Navy Chief.

He also laid the foundations of multiple development projects, including a Rs 400-crore plant under Bharat Dynamics that will make propulsion system for anti-tank guided missiles and a 600-megawatt Ultra Mega Solar Power Park being constructed at a cost of over Rs 3,013 crore.

Addressing the event, Modi said, “India’s identity was that of an importer of arms. Today, the country’s mantra is ‘Make in India, Make for the World’. The country is working to make our armed forces ‘atmanirbhar’ (self-reliant).”

“We are adding the talent of private sector with our defence sector and new start-ups are being given a chance to show their ‘kamaal’ (good work) in this sector,” he said on the final day of ‘Rashtra Raksha Samarpan Parv’.

Several initiatives and schemes were launched or dedicated to the nation during the three-day ‘parv’ in Jhansi that also celebrated the 193rd birthday of Rani Laxmi Bai.

He said the admission of girl students has started in Sainik Schools from this session and in future brave women like Rani Laxmi Bai will come out of these schools and serve the nation.

Stating that the country never tasted defeat due to lack of gallantry and valour (‘shaurya and veerta’), the prime minister said history of the country would have been different had there been enough resources and weapons with Rani Laxmi Bai.

“It has been decided that a big portion of the defence budget for purchase of weapons will be spent on ‘Make in India’ equipment and the defence minister has released a list of 200 equipment that cannot be brought (imported) from outside,” he said.

The LCH handed over by the prime minister to the Air Force incorporates advanced technologies and stealth features for effective combat roles.

The deployment of Indian UAVs by armed forces is also a proof of the growing maturity of the Indian drone industry ecosystem and the advanced EW suite will be used in different naval ships including destroyers and frigates.

In Jhansi, Modi inaugurated or laid the foundations of multiple development projects worth over Rs 3,425 crore to expedite growth of the economically backward Bundelkhand region of Uttar Pradesh.

Named after former prime minister Atal Bihari Vajpayee, the park has been built at a cost of over Rs 12 crore, and is spread over an area of about 40,000 square metre.

The park will house a library as well as a statue of Vajpayee.

The statue has been built by renowned sculptor Ram Sutar, the man behind the Statue of Unity, according to the Prime Minister’s Office (PMO).

He also launched the NCC Alumni Association with the objective to provide a formal platform to enable NCC alumni to reconnect with the organisation.

The association will further the aims of NCC and assist in nation-building.

“It will witness the enrolling the prime minister, a former NCC cadet, as the first member of the association,” officials said.

He launched the national programme of simulation training for NCC cadets with the aim to scale up these facilities for all the three wings of NCC.

The prime minister also dedicated to the nation augmented reality powered electronic kiosks at the National War Memorial which will enable visitors to pay floral homage to martyrs through click of the button.

At an event in Mahoba earlier in the day, the prime minister inaugurated more than Rs 3,240 crore worth of projects aimed at ending water scarcity for farmers in the parched Bundelkhand region.

Election to the 403-member Uttar Pradesh Assembly is slated for early next year. PTI