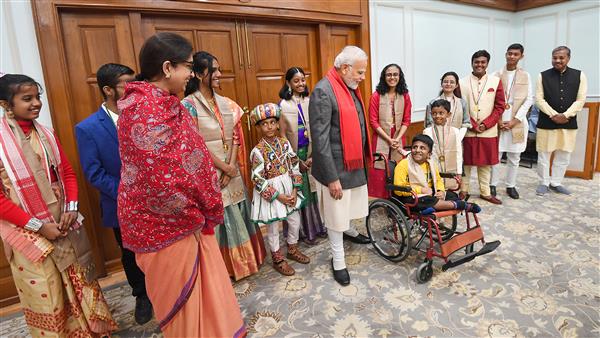 “The children asked him several questions about the challenges they face and sought his guidance on a variety of topics. The Prime Minister suggested the awardees to start by solving small problems, gradually build capacity, enhance capability and develop confidence to solve bigger problems as they go ahead in life,” a PMO’s release stated.

On mental health and problems faced by children, PM Modi talked about tackling stigma around the issue and the role of family in tackling such issues.

The Prime Minister also spoke of the benefits of playing chess, taking up art and culture as a career, research and innovation and spirituality.

The Centre has been conferring the Pradhan Mantri Rashtriya Bal Puraskar on children for their exceptional achievement in six categories — innovation, social service, scholastic, sports, art and culture, and bravery.

Each awardee is given a medal, a cash prize of Rs 1 Lakh and a certificate. This year, 11 children from across the country under different categories of Bal Shakti Puraskar have been selected for award. The awardees belonging to 11 states and UTs include six boys and five girls. They are Aadithya Suresh, M Gauravi Reddy, Shreya Bhattacharjee, Sambhab Mishra, Rohan Ramchandra Bahir, Aditya Pratap Singh Chauhan, Rishi Shiv Prasanna, Anoushka Jolly, Hanaya Nisar, Kolagatla Alana Meenakshi and Shauryajit Ranjitkumar Khaire.