PM Modi calls arrival of cheetahs in India a historic moment; Congress calls it a 'tamasha' : The Tribune India

PM Modi calls arrival of cheetahs in India a historic moment; Congress calls it a 'tamasha' 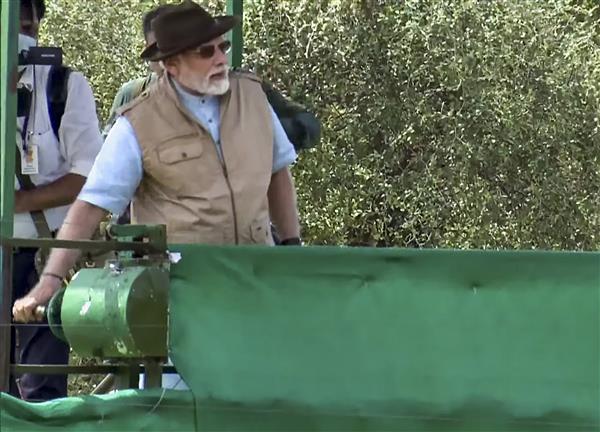 Welcoming the cheetahs in India, Prime Minister on Saturday said Project Cheetah is our endeavour towards environment and wildlife conservation.

After releasing three cheetahs in MP’s Kuno national park, the PM said, “We will also have to give them some time to adjust, make Kuno their home and ensure that our efforts are not defeated.”

Calling it a historic moment, Modi said a broken link had been established.

Meanwhile, former environment minister and Congress leader Jairam Ramesh, called the release of cheetahs a "tamasha" and a diversionary tactic.

In a series of tweets, Ramesh said, "PM hardly ever acknowledges continuity in governance. Cheetah project going back to my visit to Capetown on 25.04.2010 is the latest example.

"The tamasha orchestrated by PM today is unwarranted and is yet another diversion from pressing national issues and Bharat Jodo Yatra.

"When tigers were first translocated to Panna and Sariska during 2009-11, there were many prophets of doom.

"They were proved wrong. Similar predictions are being made on the Cheetah project. The professionals involved are first-rate and I wish the project the very best.”

What do experts say

Conservation experts say all aspects of translocation were examined by scientists from South Africa and Namibia.

However, there is some scepticism over the success of the ambitious plan, especially regarding genetic differences between the African and Asian subspecies and also climate adjustments, in some quarters.

While cheetahs can breed quite rapidly under good conditions, when they are released in reserves with leopard/other predator populations like tigers, some inter-species competition can be expected.

It would have been better to concentrate on conservation of endangered species in need of translocation, like the Asiatic lion, they add.

Once they acclimatise to the local situation and a green signal is given by experts, male cheetahs will be released in the open forest areas followed by the females, which is the standard protocol.

KNP has a good prey base for cheetahs and the area was given a green signal by experts from the Wildlife Institute of India after scouting several places, officials say.

KNP has adequate space; besides, an additional area between Sheopur and adjoining Shivpuri district will give the fastest land animal adequate space to live, they add.