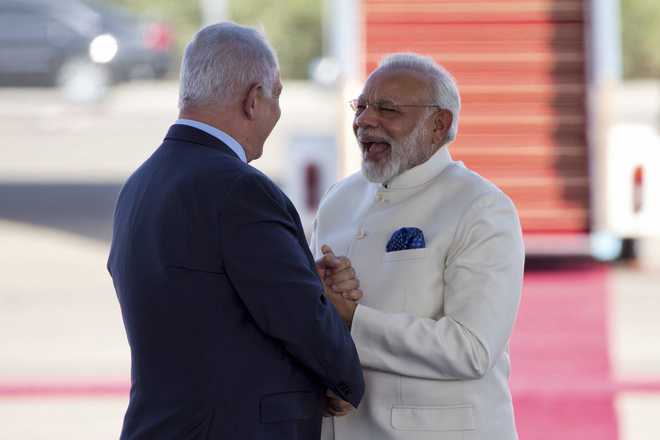 In an unusual move, Prime Minister Narendra Modi congratulated the new Israeli Prime Minister Naftali Bennett as well as the previous incumbent Benjamin Netanyahu who lost his chair by a solitary vote.

“As you complete your successful tenure as the Prime Minister of the State of Israel, I convey my profound gratitude for your leadership and personal attention to India-Israel strategic partnership,” PM Modi posted on Twitter in English and Hebrew while tagging Netanyahu.

Modi and Netanyahu have shared a close “bromance” since 2014 with Israel emerging as the second biggest supplier of defence equipment to India.

Netanyahu was the first Prime Minister to congratulate Modi on his 2019 victory.

And when Modi became the first Indian PM to travel to Israel, Netanyahu himself was at the Ben Gurion Airport. After a grand official welcome, the PM was embraced by Netanyahu who said in Hindi, “Aapka swagat hai mere dost.”

Modi’s visit was a high diplomatic watermark in Netanyahu’s eyes who once visited India eight days before a general election in Israel as if to demonstrate to the audience back home his close rapport with world leaders despite his hardline approach to Palestinians. In the run up to the polls, PM Modi along with then US President Donald Trump and Russian President Vladimir Putin were part of Netanyahu’s election campaign. The three leaders also featured in a campaign video that showed Netanyahu meeting them.

Bennett, a long-time Netanyahu’s Cabinet colleague, became Prime Minister after a Parliamentary vote he won 60-59 in the 120-seat chamber.