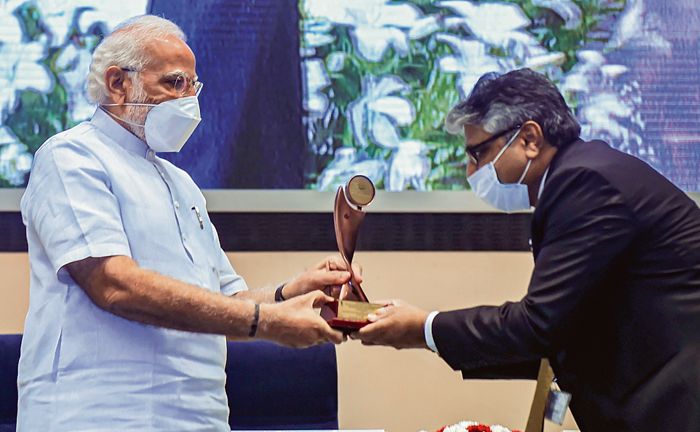 Prime Minister Narendra Modi on Thursday hailed the micro, small and medium enterprises (MSME) for making up one-third of the Indian economy and launched major initiatives to boost the sector, including a new scheme for first-time exporters and Rs 6,062.45 crore central programme to raise MSME performance.

He said his government was taking steps to help small businesses increase exports and was framing new policies to help the sector realise its full potential. The PM was speaking at the ‘Udyami Bharat’ programme, where he launched the Raising and Accelerating MSME Performance scheme, Capacity Building of First-Time MSME Exporters’ scheme and new features of the ‘PM’s Employment Generation Programme’ to ramp up the sector.

The world is impressed with India’s fast growing economy in which MSMEs have played a major role. Today, if India earns Rs 100, Rs 30 comes because of the MSME sector. —Narendra Modi, Prime Minister

He said easy accessibility of loans was the key reason for more and more people turning to entrepreneurship. He said entrepreneurship was emerging as an alternative means of livelihood for people in villages and small towns.

He said only after he became the PM in 2014, it became possible for ordinary people to secure loans from financial institutions without facing any difficulty.

“Before 2014, ordinary people used to find it extremely difficult to approach banks for loans in the absence of guarantee. A person requiring a loan had to go to a moneylender who charged him heavy interest,” the Prime Minister said, adding that it was not the case now.