Prime Minister Narendra Modi on Wednesday laid the foundation stone of the Ram temple in Ayodhya.

The Prime Minister performed the 'bhoomi poojan' before laying the stone.

After performing the ‘bhoomi pujan’, Prime Minister Modi said the wait of centuries has ended and India is creating a golden chapter in Ayodhya,

Beginning his speech with “Jai Siya Ram”, the Prime Minister told the gathering that a grand temple will be built for “Ram Lalla”, the infant Ram, who had been living in a temporary tent for years.

“Many people made sacrifices for the Ram temple. I pay my respects to all of them,” the Prime Minister said after the ground-breaking ceremony of the temple at the spot where many devout Hindus believe Lord Ram was born.

Sending out the message that “Ram is everywhere, Ram belongs to all”, Modi said the temple symbolises India’s rich heritage and will be an inspiration for all of humanity.

Despite efforts to eradicate Lord Ram’s existence, he lives in our hearts and is the basis of our culture, Modi said.

Citing Lord Ram’s message, Modi said the more powerful India gets, the more it will be loved and remain peaceful.

The construction of the Ram temple is an instrument to unite the country, he said, adding that it would lift the economy of the entire region.

“We have to join stones for construction of the Ram temple with mutual love, brotherhood,” he said, asserting that everyone’s sentiments have to be taken care of.

Lord Ram is revered in several countries, including Indonesia which has the largest Muslim population, and the temple here will serve as an inspiration for the entire humanity till eternity, the Prime Minister said.

He listed the Ramayanas popular in countries such as Indonesia, Cambodia, Laos, Malaysia, Thailand, Sri Lanka and Nepal.

Modi said references to Lord Ram are also found in Iran and China, and ‘Ram kathas’ are popular in several countries.

There are so many countries in the world where Lord Ram is worshipped and people consider themselves attached to him.

The country with the world’s largest Muslim population is Indonesia and even there various Ramayanas are popular and Ram is revered, Modi said.

In Sri Lanka, the story of Ramayana by the name ‘Janki Haran’ is told, while Nepal’s ties with Ram are connected through ‘Mata Janki’, the Prime Minister said.

“Like this, there are several countries where Ram is part of their beliefs and past,” he said.

“I believe that the Ram temple to be built here will inspire the entire humanity till eternity,” Modi said.

He noted that it is important that the message of Lord Ram, the Ram temple and of our age-old tradition reaches the entire world.

Keeping this in mind, the ‘Ram circuit’ is being made in the country, Modi said.

Earlier, the Prime Minister arrived in Ayodhya in the morning dressed in a traditional dhoti-kurta.

Security beefed up on UP-Nepal border for Ayodhya event

The PM first offered prayers at the 10th century Hanuman Garhi temple, where he did ‘aarti’ and a ‘parikrama’ of the shrine. Premdas Maharaj, head priest of the temple, presented a silver ‘mukut’ and a stole to the PM. 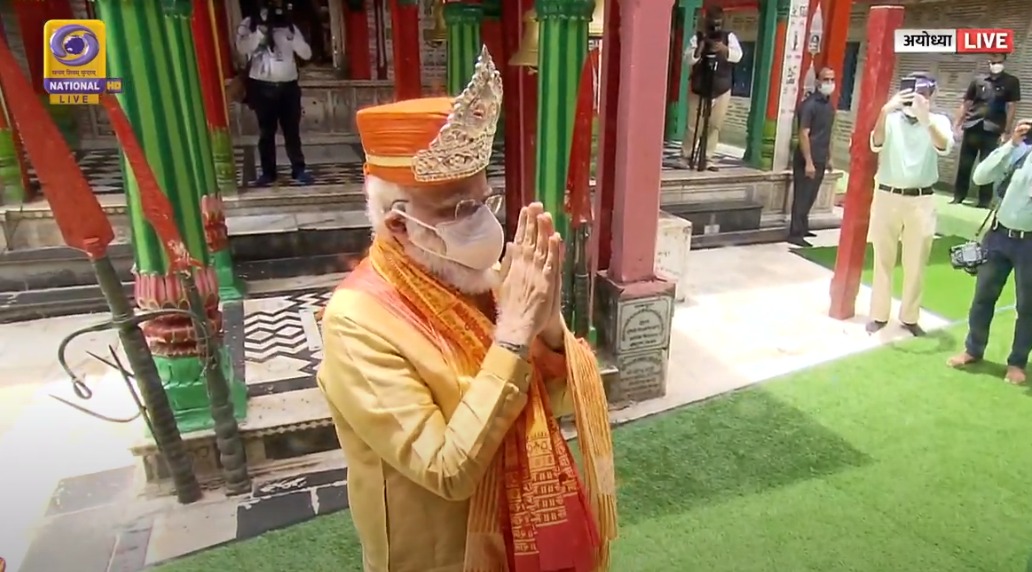 The PM spent around 10 minutes at the Hanuman Garhi temple. The entire temple premises was sanitised before Modi’s arrival.

Then, the PM proceeded to the Ram Janmabhoomi site to lay the foundation stone for the temple.

#JaiShriRam ...On the auspicious day of foundation stone laying ceremony for #RamMandirAyodhya by Hon’ble PM Shri @narendramodi Ji .My SandArt at Puri beach in Odisha. pic.twitter.com/yxhnZ2qrC2

Modi also unveiled a plaque to mark the laying of the foundation stone and released a commemorative postage stamp on Shri Ram Janmabhoomi Mandir. 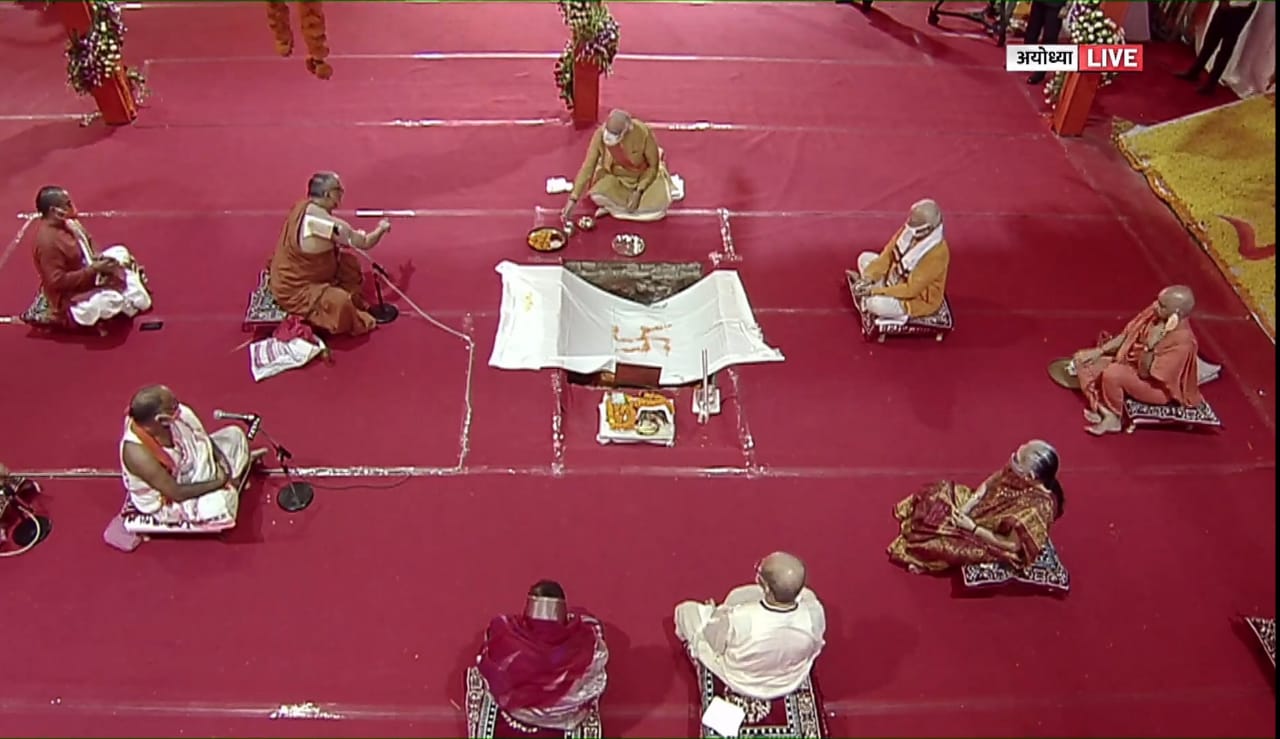 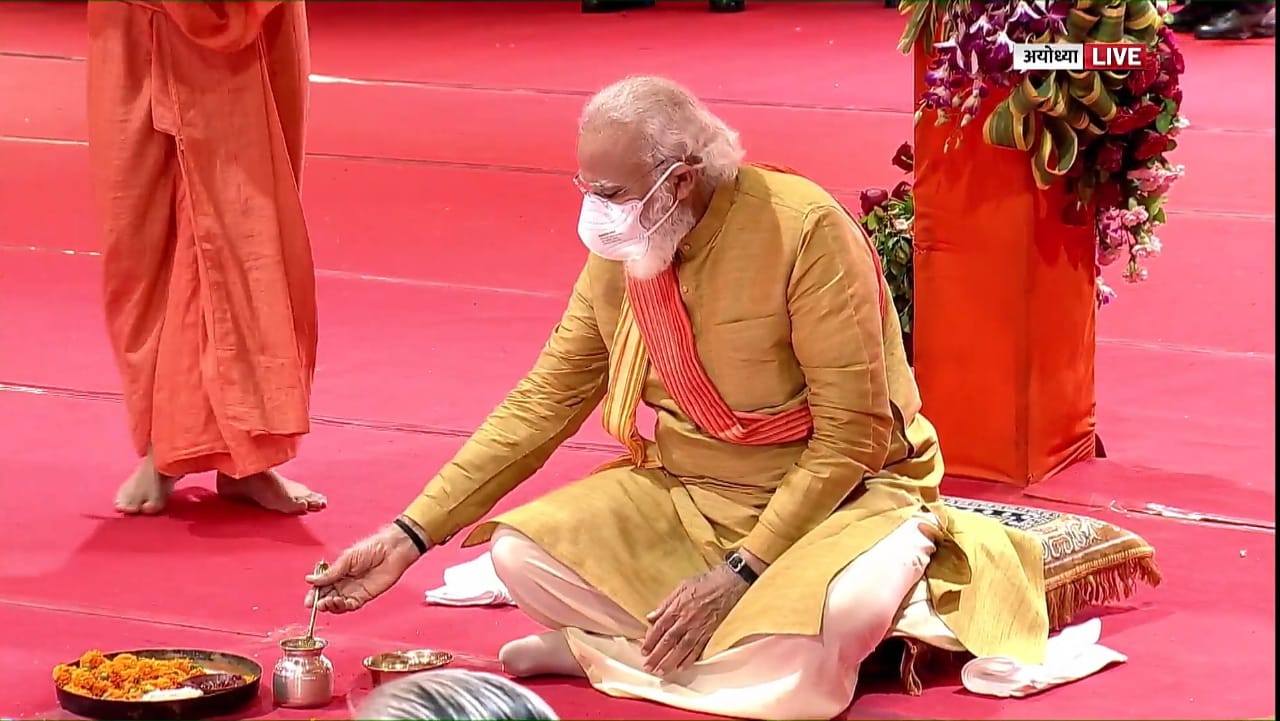 Later, UP CM Adityanath Yogi addressed the gathering and thanked the PM for making the temple a reality for more than 120 crore people.

He said generations had waited for the moment, and expressed the regret that due to the Covid pandemic many more people could not attend the ceremony. With agencies