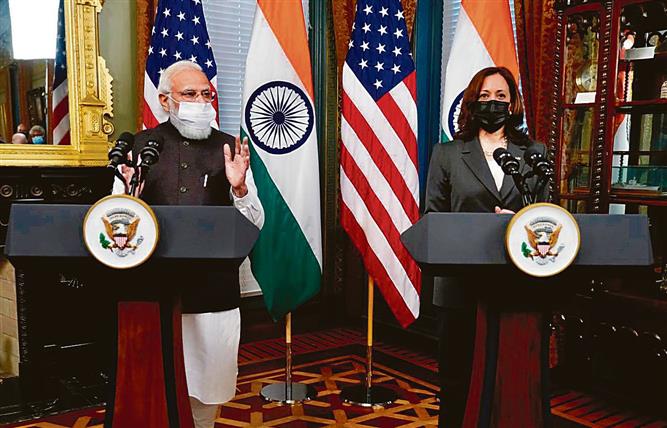 Prime Minister Narendra Modi arrived in Washington to a reception at the Andrews Air Force Base by an Indian-origin group. The PM had one-on-one meetings with CEOs of five US MNCs specialising in different sectors of great interest for New Delhi, ranging from military drones to advanced digital and solar technologies.

The PM’s schedule included interactions with US Vice-President Kamala Harris and Prime Ministers of Japan and Australia, Yoshihide Suga and Scott Morrison. He will meet US President Joe Biden at the White House on Friday followed by the first in-person Quad summit.

Amidst strict security at the hotel with the main lane barricaded with concrete barriers, the Prime Minister’s common message to the CEOs was to consider investing in India to cater to the local market as well as export.

According to the MEA, all the CEOs were enthusiastic about intensifying ties with India. In contrast, the PM had met as many as 60 CEOs during his previous visit to the US in 2019, which led to a diffused focus, it is now believed. Unveiling his expectations, the PM said this was the right time to not only manufacture in India for the domestic market but also serve the needs of other countries. It is hoped that their expanded footprints in India would catalyse interest from other MNCs specialising in cutting-edge technology to invest in India.

With Qualcomm CEO Cristiano Amon, the PM also spoke about the new liberalised drone policy and said his company could participate in new opportunities.

With Shantanu Narayen, one of the two Indian-origin CEOs, the PM discussed a big entry into artificial intelligence with the setting up of centres of excellence in India to build on its existing 4,500-employee presence in the country.

Washington: Prime Minister Narendra Modi met US Vice-President Kamala Harris at the White House on Thursday. This was the first meeting between the two leaders. Harris described India as a “very important partner” for the US and welcomed New Delhi’s announcement that it will soon resume vaccine export. Harris, 56, is the first-ever person of Indian origin to be elected as US Vice-President. Their meeting comes a day ahead of the maiden bilateral between Modi & President Biden.