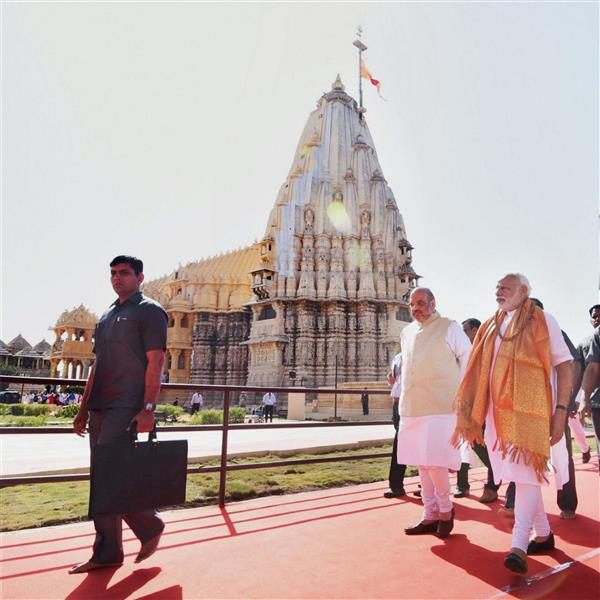 Prime Minister Narendra Modi and Amit Shah during a visit to the Somnath Temple in Gujarat's Gir-Somnath district . PTI file

The position had fallen vacant in October 2020 after the demise of veteran BJP leader and former Gujarat chief minister Keshubhai Patel.

This could well be the first time in the history of independent India that a sitting prime minister would head a famous temple trust.

Home Minister Amit Shah, one of the temple trustees, hailed the development saying, “I congratulate PM Narendra Modi on becoming the chairman of the Somnath Temple Trust. Mr Modi’s commitment towards the development of the Somnath shrine area has been unparalleled. I have full faith that the prestige and honour of Somnath Temple would be enhanced under PM Modi’s chairman-ship.”

Gujarat chief minister Vijay Rupani said, “Congratulations to PM Modi on becoming chairman of the trust for the Somnath Temple – a temple which was resurrected on the sacrifices of several people, a temple which was revived by Rani Ahilyabai and later by Sardar Patel.”

The Somnath Temple, believed to be one of the jyotirlinga shrines of Lord Shiva, was the subject of intense disagreement between India’s first President Rajendra Prasad and first Prime Minister Jawaharlal Nehru, as historical records reveal.

Nehru disapproved of then President Prasad inaugurating the newly revived Somnath Temple in 1951 and also of his ministerial colleagues’ participation in the process of resurrection of the temple.

Former Congress leader from Gujarat KM Munshi who initiated the Somnath Temple revival after India’s independence records Nehru’s disapproval of his ministers’ participation in the temple rebuilding process in his book “Pilgrimage to Freedom.”