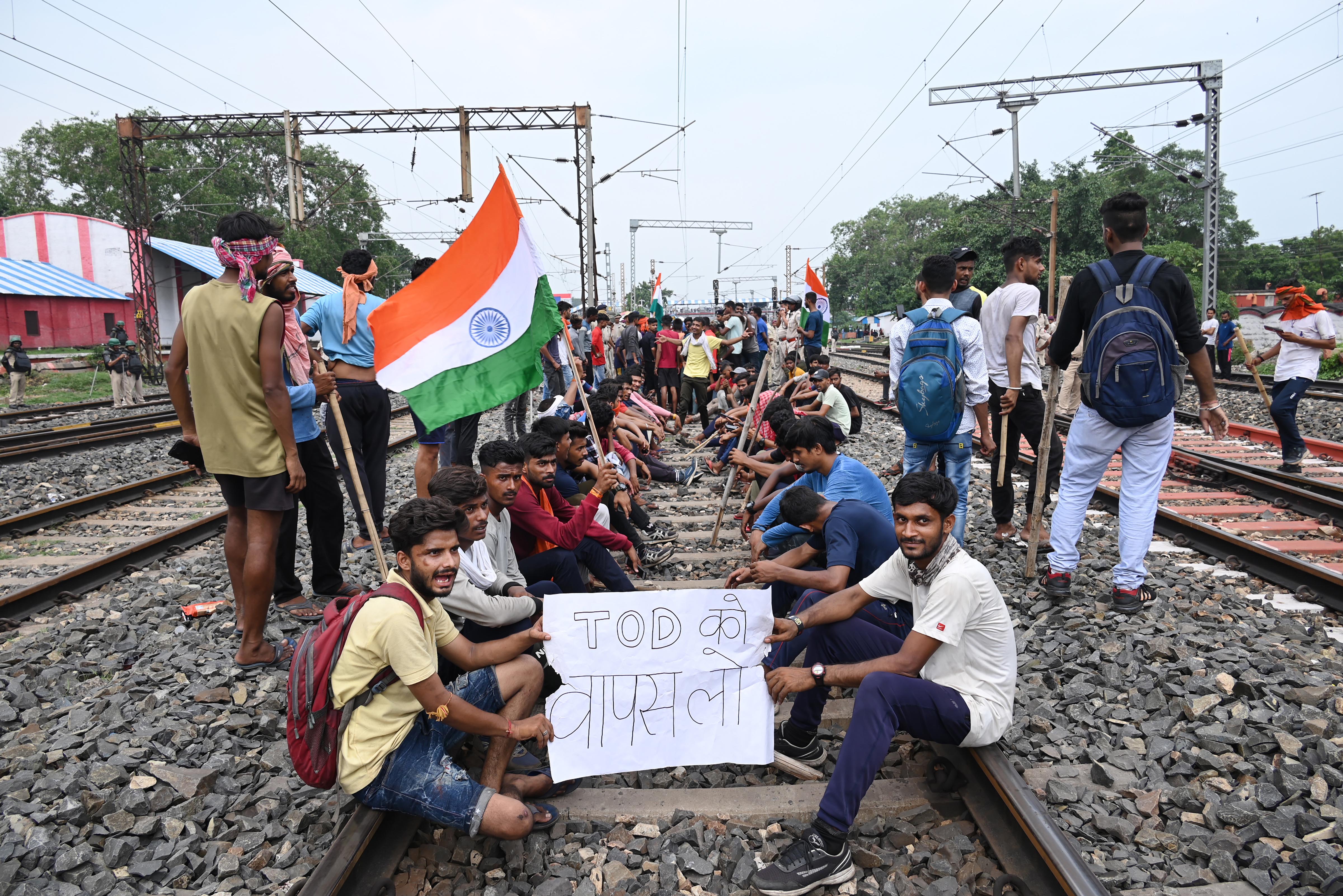 Youngsters block railway tracks in protest against the Centre's 'Agnipath' scheme, in Dhanbad, on June 17, 2022. PTI

Congress leader Rahul Gandhi on Saturday said that just as Prime Minister Narendra Modi had to withdraw the farm laws, he will have to accept the demand of the youth and rollback the Agnipath defence recruitment scheme.

The former Congress chief also said that for eight consecutive years, the BJP government has “insulted” the values of ‘Jai Jawan, Jai Kisan’.

Congress general secretary Priyanka Gandhi Vadra also stepped up her attack on the government over the Agnipath scheme and urged the Centre to understand the pain of the rural youth preparing for recruitment in the armed forces.

A man was shot dead in police firing in Telangana’s Secunderabad, trains went up in flames, and public and private vehicles were attacked, as railway stations and highways turned into battlegrounds in many states on Friday amid burgeoning protests against Agnipath.

In a tweet in Hindi, Rahul Gandhi said, “I had said earlier also that the prime minister will have to withdraw the black farm laws.”

“In the same manner, he will have to accept the demand of the youth of the country by becoming ‘maafiveer’ and take back the ‘Agnipath’ scheme,” he said.

In a tweet in Hindi, Priyanka Gandhi said, “Understand the pain of the rural youth preparing for Army recruitment. No recruitment for the past three years. They have blisters on their feet due to running continuously, they are desperate.”

Youths were waiting for the Airforce recruitment results and appointments, she said.

She also shared a copy of a letter she wrote to Defence Minister Rajnath Singh in March over delays in recruitment in the armed forces. She had urged Singh to take necessary steps to ensure that the hard work of aspirants is respected.

In her letter dated March 29, Priyanka Gandhi had flagged the problems being faced by youths in recruitment in the armed forces.

Unveiling the Agnipath scheme on Tuesday, the government said youths between the ages of 17-and-a-half and 21 years would be inducted for a four-year tenure while 25 per cent of the recruits will be retained for regular service.

The upper age limit was raised to 23 years on Thursday as the protests against the new model for enrolment of soldiers into the Army, Navy and Air Force spread.