Matangini Hazra was shot by the colonial Indian police in front of Tamluk police station on September 29, 1942 in the present East Midnapore district of West Bengal 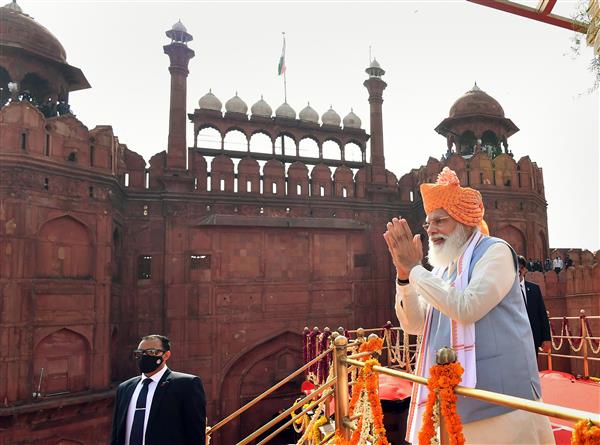 Prime Minister Narendra Modi greeting people, at the ramparts of Red Fort, on the occasion of 75th Independence Day, in New Delhi. PTI

“Matangini Hazra from Assam? R u mad? U don’t know history. U have no feelings. You just read a written speech (that also by others) with drama. This is insult to Bengal. You must beg apology,” Kuman Ghosh, TMC general secretary Kunal Ghosh said in a tweet.

“Now what did you say today ! That Matangini Hazra is not a freedom fighter from Bengal. My NEW & 10th Question for you : is this video doctored ? Or part of your Red Fort speech ?”, TMC leader in the Rajya Sabha Derek O’Brien said in a tweet.

Modi, while delivering the PM’s customary speech from the rampart of Red Fort today on the occasion of the 75th Independence Day, was talking about the contribution of women in the struggle for freedom. While uttering the names of some of the prominent women freedom fighters, Modi said “…apna Assam-me Matangini Hazra ki parakram ho…” (the courage of Matangini Hazra of our Assam).

Matangini Hazra was shot by the colonial Indian police in front of Tamluk police station on September 29, 1942 in the present East Midnapore district of West Bengal when she was leading a demonstration organised as a part of the “Quit India” movement call given by Gandhi.

Quoting a report from a contemporary newspaper, historian Bidyut Chakraborty wrote in his book “Local Politics and Indian Nationalism: Midnapur (1919-1944)”, that the 72 year old Matangini Hazra, despite shot in the forehead and both her hands, continued marching holding the Congress flag in her hand leaving the other volunteers behind.

“Kanaklata Barua, a young woman activist of Assam, was shot by police for participating in the Quit India movement. Modi’s speechwriter seems to have mixed up Kanaklata with Matangini Hazra,” Samarjt Choudhury, a Kolkata-based journalist, remarked.

West Bengal BJP president Dilip Ghosh, however, described the PM’s faux pas as a “small mistake”. “Thousands of people laid down their lives for the freedom of the country. The PM may have erred in saying Matangini Hazra was from Assam. It is not a big deal,” Ghosh said.