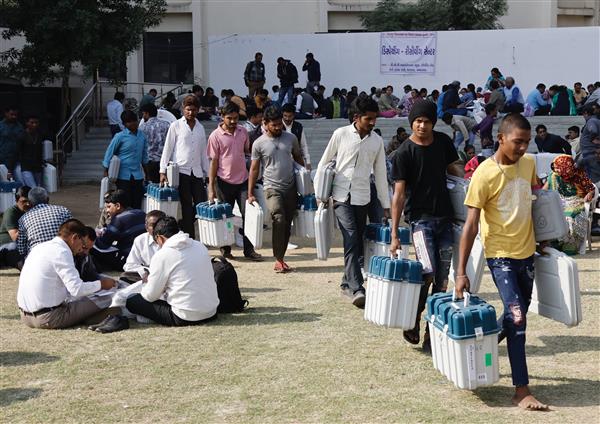 Officials leave for polling stations in Ahmedabad on Sunday. PTI

Prime Minister Narendra Modi will vote in the second and final phase of the Gujarat Assembly elections on Monday, with 93 segments going to the polls in 14 districts of north and central Gujarat.

As many as 833 candidates are in the fray in Gujarat tomorrow, with the BJP seeking to surpass the 2002 record of winning 127 of the 182 seats in the Assembly, and the Congress and AAP seeking to end the BJP's 27-year run in the state.

Voting will be held in segments spanning districts that include Ahmedabad, Vadodara and Gandhinagar.

Bypolls will also be held tomorrow for the Mainpuri Lok Sabha segment and six Assembly seats — Rampur Sadar and Khauatli in Uttar Pradesh, Padampur in Odisha, Sardarshahar in Rajasthan, Kurhani in Bihar and Bhanupratappur in Chhattisgarh.

Ahead of the Mainpuri bypoll, Pragatisheel Samajwadi Party (Lohia) president Shivpal Singh Yadav alleged that drones were being used to conduct surveillance on his home.

While the Mainpuri poll was necessitated by the demise of SP founder Mulayam Singh Yadav, the sitting MP, the Rampur and Khatauli bypolls were necessitated by the convictions of sitting MLAs Azam Khan of the SP and Vikram Saini of the BJP, respectively. In Khatauli, the BJP has fielded Saini’s wife Rajkumari against RJD-SP candidate Madan Bhaiya.