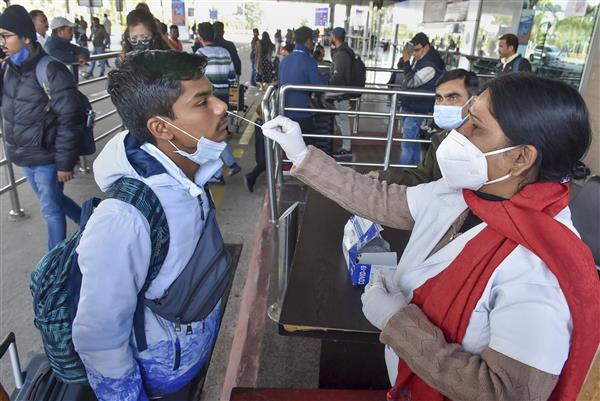 A medic collects a swab sample for Covid-19 test from passengers at Birsa Munda International Airport in Ranchi on Sunday. PTI

India on Sunday recorded 227 new Covid-19 cases, marking a rise after weeks of consistent decline, and signalling a need for caution in the wake of the Chinese surge and the ongoing festive season. 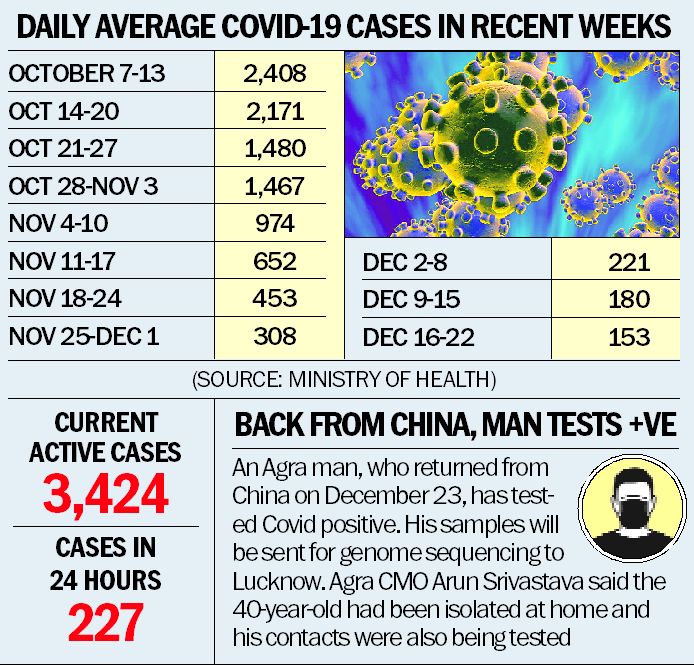 The average daily Covid cases were 153 in the week between December 16 and 22. The recording of 227 new cases in the past 24 hours means a near 50 per cent rise in the daily cases over last week.

Further, today’s daily Covid cases also mark an increase after consistent decline since the week of October 7 to 13 when the daily cases averaged 2,408.

Daily positivity recorded over the past 24 hours was 0.18 per cent, a slight increase over 0.14 per cent, the positivity rate in the week ending December 22.

Experts, however, said the cases were still low, but the rising trend needed to be closely tracked to quickly find any major surges, which would call for active surveillance, testing and isolation.

Prime Minister Narendra Modi, in the last “Mann ki Baat” broadcast of the year, urged caution. He said many people were either on a vacation or would embark on one during New Year. “I urge people to follow the Covid protocol such as masking up and practising hand and respiratory hygiene to ensure that their holidays and mirth are not adversely impacted by the virus,” the PM said.

The government, meanwhile, sent a checklist to the states and UTs, which have been asked to conduct mock drills at all health facilities on December 27 to keep medical infrastructure in a high state of preparedness.

District collectors have been tasked with conducting the drills and also uploading reports of preparedness of all facilities on a specially designed portal by the evening of December 27. Meanwhile, experts said Omicron’s sub-variant BF.7, which was driving the surge in China, could come to India but would not have the same impact as it would have in China because India had developed hybrid immunity — a mix of vaccine-induced immunity and herd immunity — on account of a large cohort of people getting infected.

She said over 90 per cent 12-year-plus people in India had received both Covid vaccine doses and 90 per cent had been infected, giving Indians hybrid immunity, which meant if the same variant, as circulating in China today, came to India, “it will not do the same damage as it will do in China, where a majority of the people are unvaccinated and unexposed”.

CSIR- Centre for Cellular and Molecular Biology (CCMB) Director Vinay K Nandicoori also said, “India will not see too much severity of infection with BF.7 variant since Indians have developed herd immunity to a significant level on account of infection during the Delta and Omicron variants and also due to high levels of Covid vaccination.”

Moreover, BF.7 has been in India since October with at least four cases detected, but it has not powered any surge as of now. China has a huge vulnerable elderly population of 130 million that is unvaccinated or under-vaccinated.