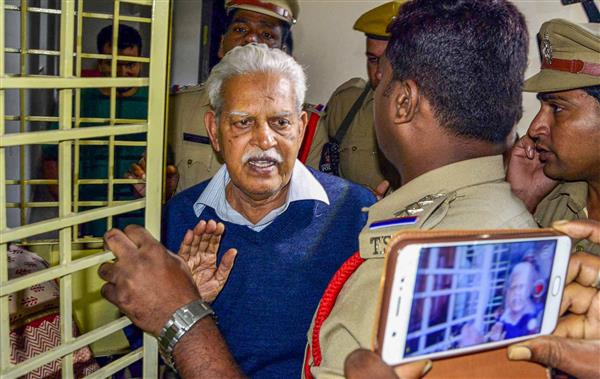 The National Investigation Agency (NIA) on Wednesday urged the Bombay High Court to reject the plea for bail on medical grounds filed by poet-activist Varavara Rao, arrested in the Elgar-Parishad-Maoist links case, arguing that his present health condition is stable.

Additional Solicitor General Anil Singh, who appeared for the NIA, reminded the court that Rao's medical reports from the Nanavati Hospital from earlier this month stated that he was stable and fit to be discharged.

He pointed out that the Maharashtra government had made a statement before the HC last week, saying once discharged from the private hospital, Rao (81) will not be sent back to the Taloja prison in Navi Mumbai, but instead, he will be admitted to the prison ward of state-run JJ Hospital here and given requisite medical care.

"His (Rao's) medical reports, his present health condition is stable, and the state's statement takes care of all the prayers made in these pleas," Singh said.

"Therefore, the question of granting him bail arises only if the court doesn't have faith in the care that the JJ Hospital will be able to provide," Singh told a bench of Justices SS Shinde and Manish Pitale.

The bench was hearing three petitions---a writ petition seeking Rao's complete medical records and a bail plea on medical grounds filed by Rao. The third one is a writ petition filed by Rao's wife Hemlatha alleging a breach of his fundamental rights owing to lack of medical care during his continued incarceration.

Hemlatha, too, had sought in her plea that Rao should be let out of prison and be permitted to go back to his family in Hyderabad.

The poet-activist, lodged in the Taloja prison as an undertrial, is currently admitted to the Nanavati hospital in Mumbai.

Following the NIA's submission, the court, however, pointed out that as per the medical reports, Rao was being given over 20 pills a day.

"Just see the list of medicines being given to him everyday. He is sustaining on these medicines. So, he's continuously on medical support," HC said.

ASG Singh, however, said most of these pills were "age-related."

"We also have old people in our homes and 70 to 80 per cent of these medicines are taken (by elderlies)," the NIA counsel said.

He reiterated that as per the Nanavati Hospital report, Rao didn't have dementia, a disease in which there is deterioration in memory, behaviour and the ability to perform everyday activities.

The HC, however, pointed out that Rao's reports from the JJ Hospital, the Taloja prison hospital and state-run St George hospital, issued in November last year, all mentioned dementia, and brain atrophy or shrinkage of the brain.

Singh, however, said the older report notings on dementia seemed more like "course and discussions" among doctors to check for dementia and delirium.

"We have full faith in the JJ Hospital but the Nanavati Hospital, where he was last treated, says he doesn't have dementia right now," Singh said.

"We believed the Nanavati Hospital while Rao was being treated there. Why should we not believe it then when he says Rao doesn't have dementia?" he said.

"The Nanavati report says Rao doesn't require indoor management and is fit to be discharged. This is the latest report, there is no counter or different medical advice so we have to believe this report," Singh said.

"Therefore, unless the court does not have faith or it feels the JJ prison ward will not be able to provide him (Rao) medical care, only then should he be granted bail," Singh said.

Rao's counsel, senior advocate Anand Grover argued that the JJ Hospital or any other hospital was a "bed of infection," and the ailing Rao must not be sent there.

"The only option is to send him back to the Taloja prison if he is fit, else let him out on bail to be at home with his family," Grover said.

The HC then directed the Nanavati hospital to submit a fresh medical report with Rao's latest health condition on Thursday morning and will continue hearing the arguments in the afternoon.

Rao has been in an out of the JJ Hospital in Mumbai and the Taloja prison hospital since his arrest in June 2018.

On July 16 last year, he tested positive for coronavirus after which he was shifted to the Nanavati Hospital.

He was discharged from the Nanavati Hospital following a final assessment report on July 30 and sent back to the Taloja prison.

In December last year, he was admitted to the Nanavati Hospital again following the intervention of a bench of Justice Shinde and Justice MS Karnik.

The case related to alleged inflammatory speeches made at the Elgar Parishad conclave held in Pune on December 31, 2017, which, the police claimed, triggered violence the next day near the Koregaon-Bhima war memorial located on the outskirts of the western Maharashtra city.

The police have claimed the conclave was organised by people with alleged Maoist links. Several activists and academicians have been named as accused in the case. --- PTI