60 pc voting in second phase of UP polls : The Tribune India

60 pc voting in second phase of UP polls 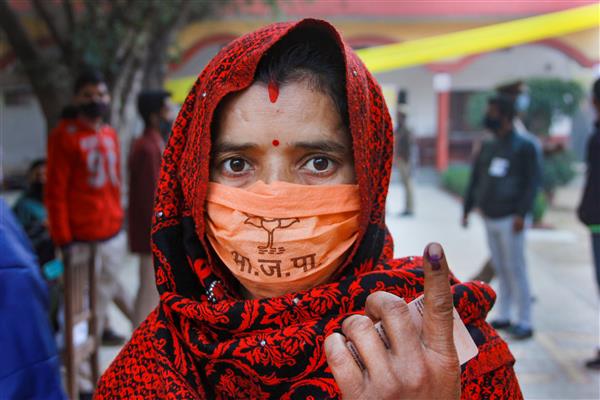 A woman after casting her vote in Moradabad on Monday. PTI

Uttar Pradesh recorded a voter turnout of over 60 per cent in the second phase of the assembly elections with another hour to go before polling booths closed.

Additional Chief Election Officer Brahma Dev Ram Tiwari said polling in the state had been peaceful till then.

Polling across 55 assembly constituencies assembly in nine districts got off to sluggish start at 7 am due to the cold and fog at several places. But the pace picked up after a couple of hours.

The constituencies in the second phase are spread across Saharanpur, Bijnor, Moradabad, Sambhal, Rampur, Amroha, Budaun, Bareilly and Shahjahanpur districts. Altogether 586 candidates are in the fray in this phase.

A turnout of 62.4 per cent was recorded in the first phase of the seven-phase Uttar Pradesh Assembly polls on February 10.

The opposition Samajwadi Party alleged that a person voted for the party in Saharanpur but the vote was wrongly recorded for the BJP. Additional Chief Election Officer Brahma Dev Ram Tiwari, however, said the information was found to be false by teams that went to the booth.

He said the Election Commission has also taken note of another complaint that members of the Yadav community were not allowed to cast their votes.

It had found no truth so far in a complaint by BJP leader J P S Rathore, who alleged fake voting by burqa-clad women. “A report has been sought from the district magistrate,” Tiwari said.

As the polling got under way, Prime Minister Narendra Modi and other leaders appealed to the people to vote in large numbers in the state, as well in Goa and Uttarakhand where single-day polling was being held to elect their assemblies.

SP patriarch Mulayam Singh Yadav, who has stayed away from campaigning, also sent out a brief video message to voters.

“I appeal that you lend your valuable support to the Samajwadi Party to help it win with a huge mandate,” the 83-year old leader, who is now in Delhi, said.

Of the 55 seats in which voting was held in the second phase, the BJP had won 38 in the 2017 assembly polls, the SP bagged 15 and the Congress two.

The SP and the Congress had contested the last assembly elections together.

Of the 15 seats then won by the SP, Muslim candidates were elected on 10.

Several areas that went to the polls in this phase have a sizeable Muslim population influenced by the Barelvi and Deoband sects, and are considered strongholds of the SP.

Prominent candidates include former minister Dharam Singh Saini who joined the SP shortly before the elections and is trying his luck from Nakur. Uttar Pradesh Finance Minister Suresh Khanna is contesting from Shahjahanpur.

Senior SP leader Mohammad Azam Khan is contesting from his stronghold Rampur and his son Abdullah Azam from the Suar seat.

The younger Azam is pitted against Haider Ali Khan, the scion of the Nawabs of Rampur, who is trying his luck on a ticket from the Apna Dal (Sonelal), a BJP ally. He is the grandson of former MP Noor Bano.

The counting of votes is on March 10. PTI